The Washington Post has announced the winners of its 5th annual peeps show. That peeps as in the peeps you buy at Easter time. Here's a link to see the winners and runners up.


Here's a screen shot of this year's winner and a description of it. 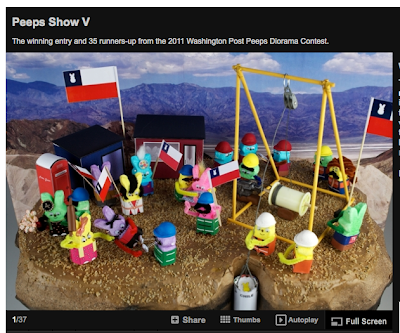 This year's winning diorama, which depicts the dramatic rescue of 33 mine worker in Copiapo, Chile, last October, is the work of Mary Jo Ondrejka from Reston; Bryn Metzdorf from Fairfax; and Margaret Hartka from Parkton, Md. A Peep version of miner Ariel Ticona meets his newborn daughter for the first time, while Peep Johnny Barrios Rojas is greeted by both his wife and mistress.
Posted by Jason in DC at 9:23 PM