I Survived the Polar Vortex

It sounds a little more dramatic then it really is.

One thing I was concerned about was that my pipes might freeze. Well not really concerned but I thought I could take a couple of steps to make sure nothing would happen to them. Better to be safe then sorry.

I was most concerned about the wash tub that is in my basement. It is very close to the basement door. I decided to do a little winterizing. I got a bunch of towels and put them on the floor by the door’s threshold. I then got a blanket and covered the door and the window by it (it’s actually frosted glass blocks to allow some light into the basement). Then I put towels above the blanket to block the air coming in from the top of the door. The final step was to turn on the faucet in the wash tub a little and let it run for the night.

I came down in the morning and everything was fine. I turned off the water but kept everything else as it was. I think I will probably take it down tomorrow when I get home from work.

This morning was the layeraton to make sure I would not freeze when I walk to the Metro. I started off with tow pairs of socks for my feet and my heavy work boots. I brough along my regular shoes to change into once I got to work. I’d hope to find something to wear under my jeans but really didn’t find anything that would fit right. I ended up settling on a pair of boxers.

As for my torso, it had many layers. I started out with a heavy undershirt. Then a heavier than normal shirt. Next was a sweater. After that I put on a hoodie. From there a scarf around my neck. On my head a regular knit hat. Then one of those three quarter skii mask (not entirely sure what they are called) where the area around your mouth and nose is open. On went the hood. On went the winter coat. On went my second scarf to wrap around the area not covered by the mask.

Off I set for work. I decided to go early to avoid crowds. I figured people might be leaving later so as to be going to work when the sun was up. Also if there were any delays on the Metro it would not be over flowing with people. There was a problem at Brookland with a crakced rail. I’d thought of walking to that stop because the platform isn’t as high off the ground as the one at Rhode Island Avenue is.

No such luck. I had an uneventful walk to Rhode Island Ave. It wasn’t all that bad when the wind didn’t blow. But when it did blow WOW it was cold. Got to the station. Only had to wait like three minutes for a train and off I went. The walk from Metro to work was fine. Stopped off at the Starbucks on the way (for a change there was no line) to warm up and get something to eat.

The commute home was really no problem. Yes, it was cold but there was little or no wind and that made all the difference.

Here I am at work getting ready to head out to home. 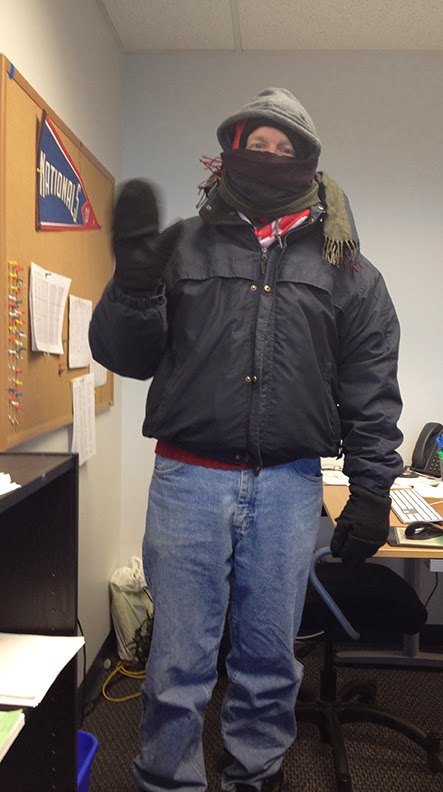 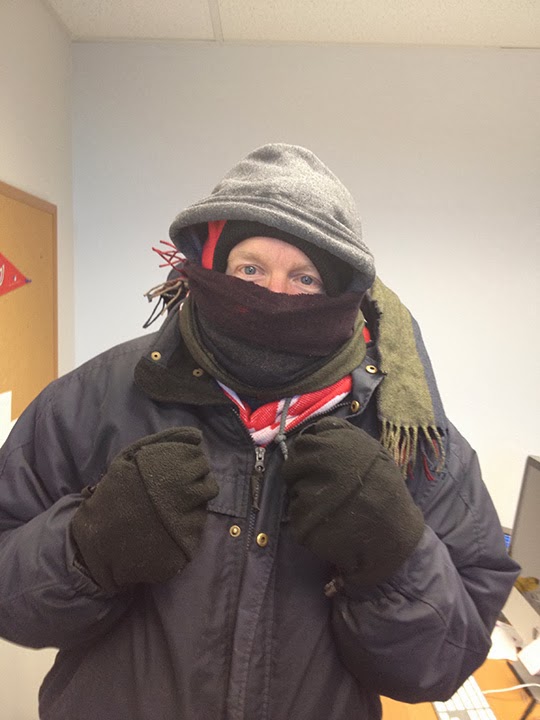 so stylish. i saw that look on the runways at paris fashion week!

I think you meant to headline this post, "I Survived the Liberal Conspiracy", since Rushbo schooled us all that the liberals' so-called "polar vortex" was all a hoax to outlaw teddy bears—or something. Somehow, I just can't pay any attention to whatever Rush says…

Thank you Tom. Good to know I have a career to fall back on.

Yes, Art, you are right. But I'm part of the conspiracy and helping to move it forward.