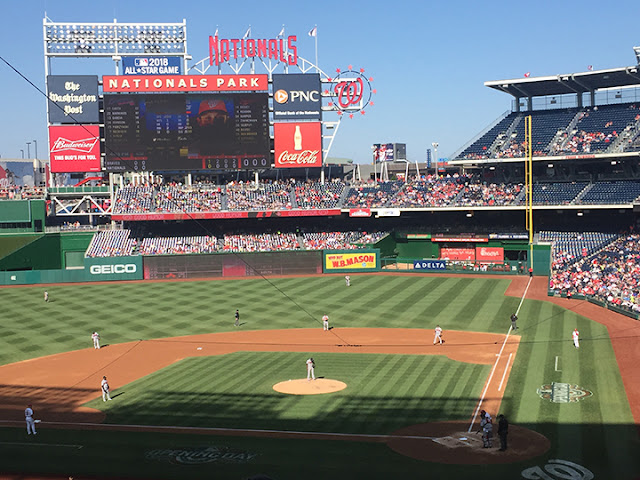 What a day to be at Nationals Park!

The weather was perfect. The Nats were on. They beat Atlanta to sweep the series. Oh and Bryce Harper hit home run number 100 and it just so happened to be a grand slam. His first grand slam.

As Harper was stepping to the plate with the bases loaded, everyone in Nats Park was thinking wouldn't this be the perfect time for Harper to hit homer 100. Mark and I and the person in the seat next to us said it out loud.

And sure enough he did. You knew the moment he hit the ball it was gone. Everyone knew it was gone. What a game!

Here's Harper crossing home plate and being congratulated by his team mates.


History left a two-foot dent in the scoreboard at Nationals Park on Thursday afternoon. Just below Section 240, the board was flashing an ad for Good Humor ice cream at the moment of impact. The “r” disappeared, damage done by Bryce Harper on the reigning National League MVP’s 100th home run, which also happened to be the first grand slam of his career. The blast was the decisive blow in the Washington Nationals’ 6-2 win over the lowly Atlanta Braves.


Harper continues to show why he is he one of the best players in baseball.
Posted by Jason in DC at 6:16 AM