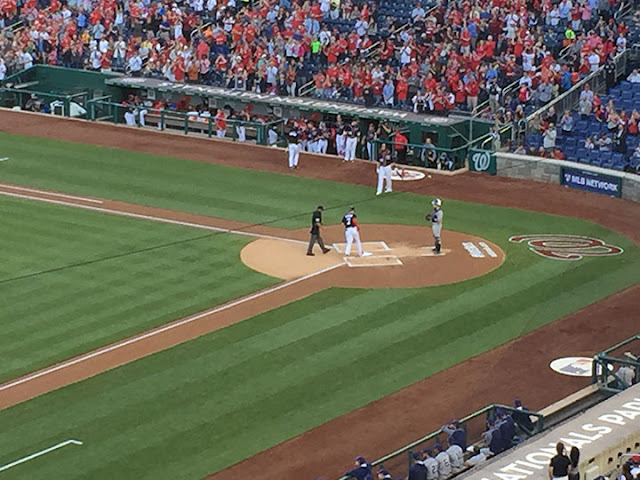 There were a couple of bumps along the road to the win when the bases were loaded in the 9th. But Max and the Nats prevailed.  From the Post:


They got there in the ninth inning of Washington’s 5-1 win. Scherzer had just issued his second walk with his 100th pitch after surrendering a one-out single, prompting Speier  [Chris Speier was filling in as manager because Dusty Baker was away] to take that unenviable stroll to check on the right-hander as boos descended from the crowd at Nationals Park. The infielders gathered around the two as they chatted. Scherzer thought he had 110 pitches in him so he told Speier he had a few more left.

He then went 0-2 on Ryan Schimpf, but threw three consecutive balls before hitting him to load the bases.

That coaxed Speier out again to pull Scherzer with his pitch count at 108. He was greeted with cheers on his walk off the field after 8 2 3 sterling innings, one out short of the Nationals’ first complete game in 2017. It was on Koda Glover, Washington’s recently named closer, to avoid another bullpen meltdown and he finished the daunting assignment with ease, striking out Hunter Renfroe on a 96 mph slider to improve Washington’s record to 29-18.

It was an interesting game because all of the runs were scored by home runs for both teams. Trea Turner has a solo shot in the 1st. Michael Taylor a two run in the 4th. Finally Bryce Harper a two run shot in the 7th. 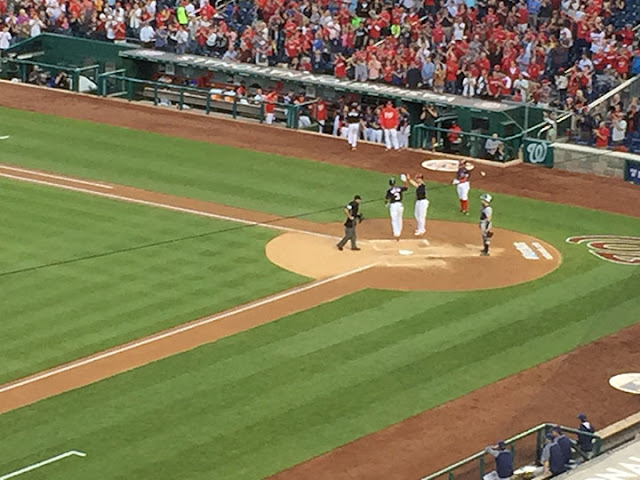 But the story of the night was Scherzer:


The four-run cushion was ample for Scherzer, who pitched with a blister on his right middle finger but still managed to bounce back from his worst start of the season. After experiencing atypical command problems in his five-inning start against the Atlanta Braves last Saturday, he adjusted his hands, keeping them high over his face, which he explained is the foundation in his delivery.

The result was a deluge of strikes, and dominance. Leaning on his slider, he threw first-pitch strikes to 21 of the 31 batters he faced and amassed seven of the 13 strikeouts with three pitches. He missed an immaculate inning — three strikeouts on nine pitches — in the third by two pitches. He allowed three hits and walked two. He was at his best.

It also happened to be suite night for the season ticket holder group I'm part of. And we got our name up on the score board! 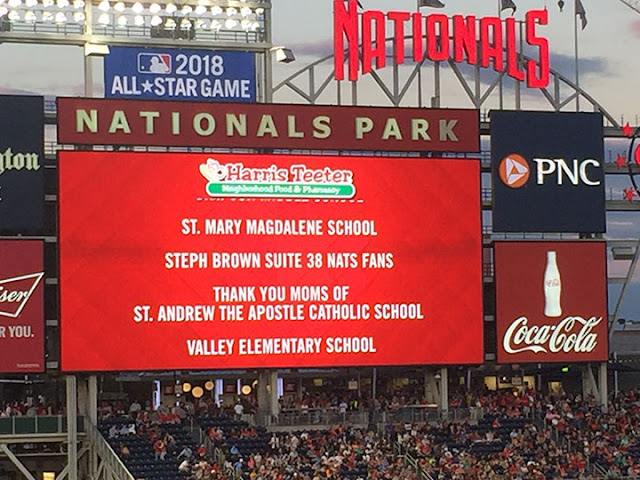 I'm off to another game in a little while. It's Start Wars day. I'm finally getting to go to one of these. The last two were in July and it was just too hot to go. Of course today it might rain but I think it miss us.
Posted by Jason in DC at 12:08 PM