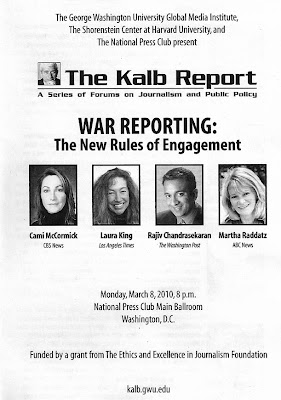 A great Kalb Report last week. This one was on war correspondents called War Reporting: The New Rules of Engagement

All four journalists have spent extensive time in Iraq and Afghanistan.

Cami McCormick is still recovering from injuries that she sustained in Afghanistan.

The U.S. military says a CBS Radio News correspondent wounded in eastern Afghanistan has been flown to Germany for additional medical treatment.

Cami McCormick was wounded Friday when the Army vehicle she was in struck a roadside bomb in Logar province.

CBS and NATO have not revealed the extent of her injuries.

McCormick, 47, was first treated at a field hospital and then at Bagram Air Field in Afghanistan. U.S. military spokeswoman Sgt. Susan Wilt says she flew to Landstuhl, Germany, on a military flight early Sunday.

They said that there is a better overall picture of what went on and what is going on in Iraq in comparison to Afghanistan. The main reason for that is there are more local Iraqi reporters that the main news sources can turn to. As Martha Raddatz said to get the bigger view you need to involve more people.

Chandrasekaran from the Post made in interesting point that you learn more one day on the ground in the war zone than interviewing people in DC for 30 days. It brought up a general discussing of the fact that people here in America the deciders so to speak don't always know what is going on on the ground day to day.

They also commented on the resilience of both the Iraqi and Afghan people. Also that in what has to be one of the worst situations possible you see the whole spectrum of humanity. People doing terrible things while at the same time other people deciding not to overwhelmed by the violence going on around them.

They said that most if not all of the soldiers are on board about the mission. But at the same time they are more than willing to voice their concerns about how things are being done on a day to day basis.

For me this was one of the best Kalb Reports I've been to.
Posted by Jason in DC at 5:34 PM