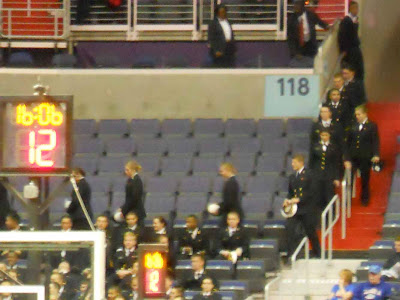 The Midshipman arrive at Verizon Center. 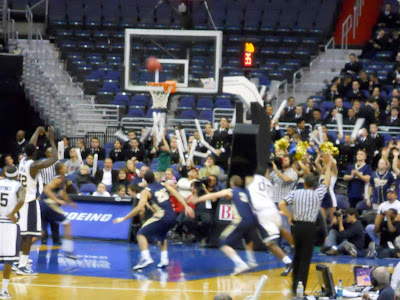 The Midshipman try to distract a GW player while he shots free throws.

This sums up the performance of the GW Colonials on Sunday:

Navy defeated George Washington, 64-57, on Sunday evening in the BB&T Classic at Verizon Center, the Midshipmen's first win against the Colonials since Feb. 14, 1980 and only their second win against GW in their last 17 meetings.

And one of the major reasons they lost the game was this:

GW, which went long stretches in this game without a field goal, tried to counter Navy's three-point shooting - the Midshipmen made 11 shots from behind the arc - by attacking the basket and drawing fouls. It was a successful strategy, in part. The Colonials went to the free throw line 28 times in the game. The problem was, they made only 18 foul shots.

If they'd done a little better with their free throws, the outcome of the game might have been very different. Hopefully this will be the last year the GW coach is there.
Posted by Jason in DC at 6:25 AM