Honoring Miriam — A Trip to the National Gallery It's been eleven years today since my mom, Miriam, passed away. This time of year is always hard. But this year was just a little harder because the date and day matched from eleven years ago. It seems like a long time and in other ways it seems like a very short time.

Each year I go down to the National Gallery of Art. It was her favorite museum in Washington. She loved the impressionists. We would always spend extra time in them. She particular liked two works by Pierre-Auguste Renoir. They were the Girl with a Hoop and Girl With a Watering Can. But she loved all of the impressionists. 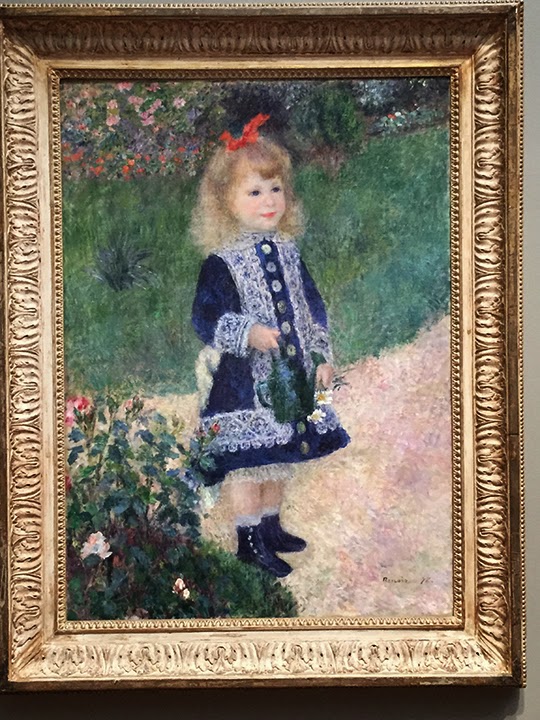 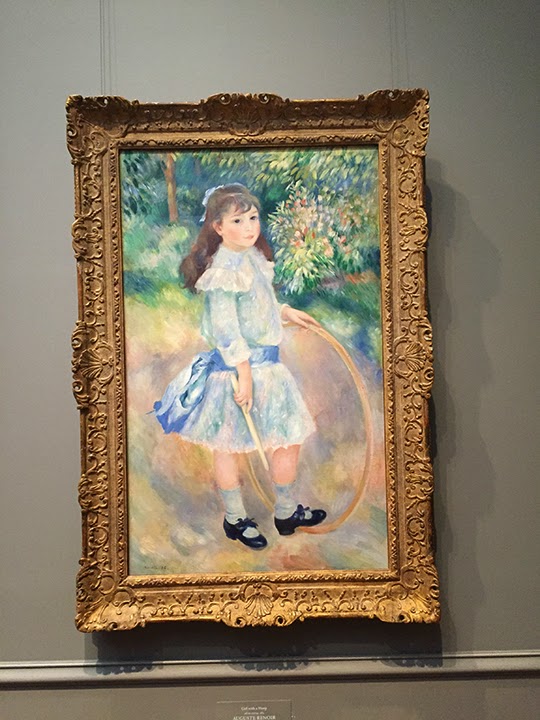 Each year I go down and see them. 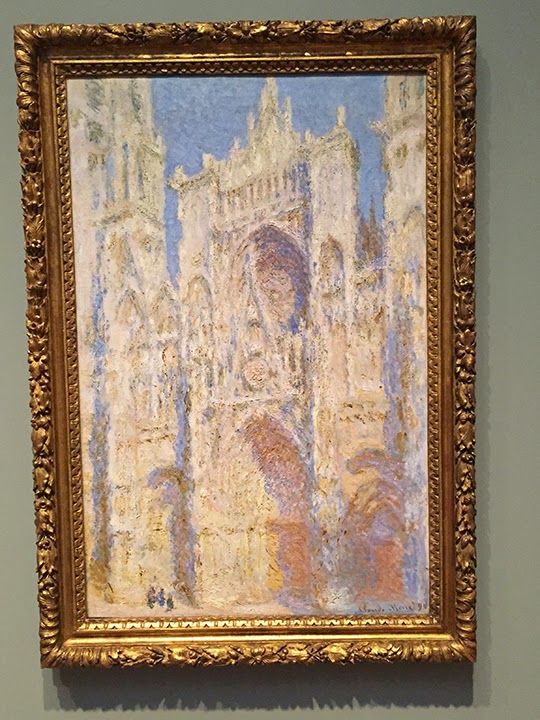 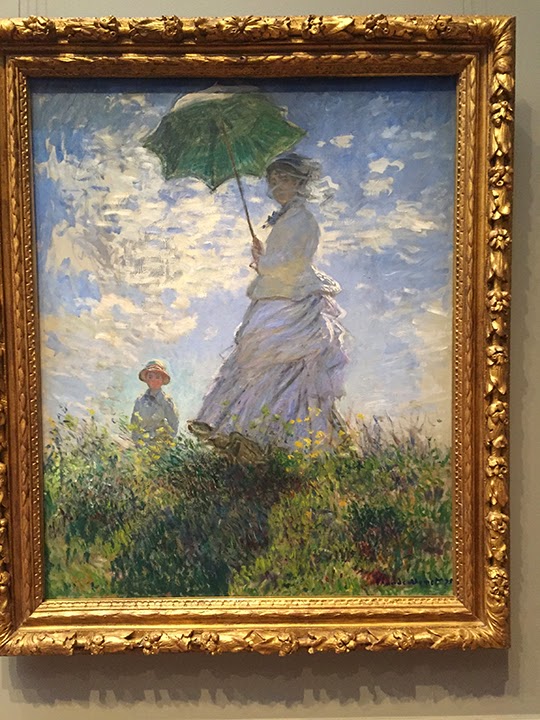 The other thing I do is go to the Gallery cafeteria and get some chocolate pudding. I then sit as close to the waterfall and eat my pudding and think of my mom.

The pudding story I've told before but here it is again. Back in the day my mom would make chocolate pudding for dessert. Now this was not instant pudding but the kind you had to really make and cook on the stove. Once mom was done making it she would put it in the refrigerator to cool down. Now it was important to cover the pudding sot it would not get that hard gross layer on top of it. To prevent this from happening, she would cover the pudding with wax paper (yes wax paper which tells you how long ago it was). The big thing in our house was who would get to lick the pudding off the wax paper once the paper was pulled off the pudding. That's the reason for the chocolate pudding.

It's just my way of remembering her. 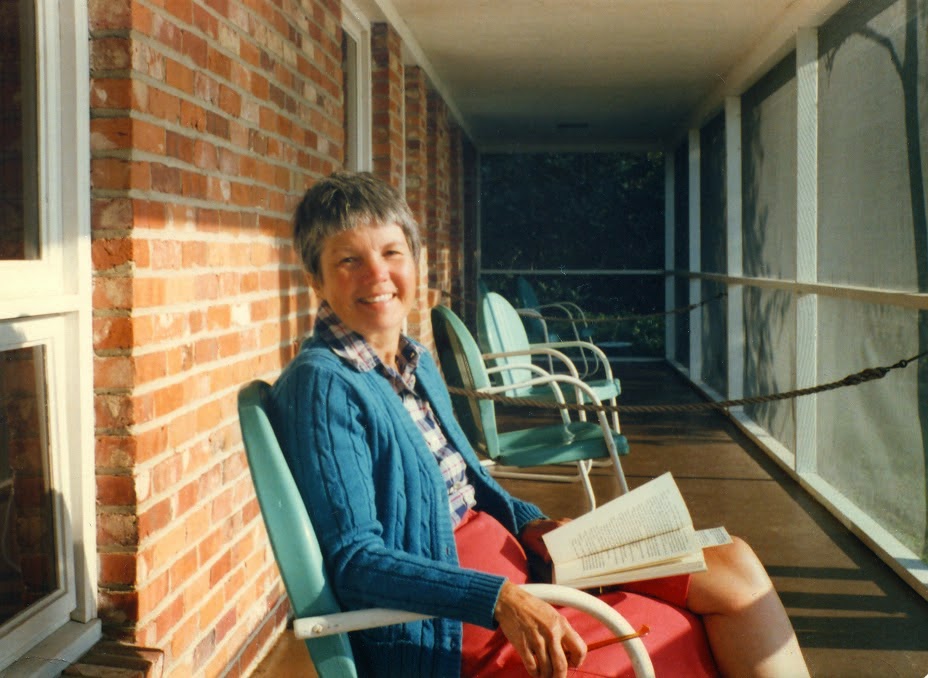 I saw these guys in the gift shop at the Natural History Museum. I thought they would be really expensive but was surprised that they weren't. The gray one in the first picture was $25. The penguins with hats, they looked so cute in them, were $38. The big guy went for $150. Not bad at all. Most of all all of them were really really soft. 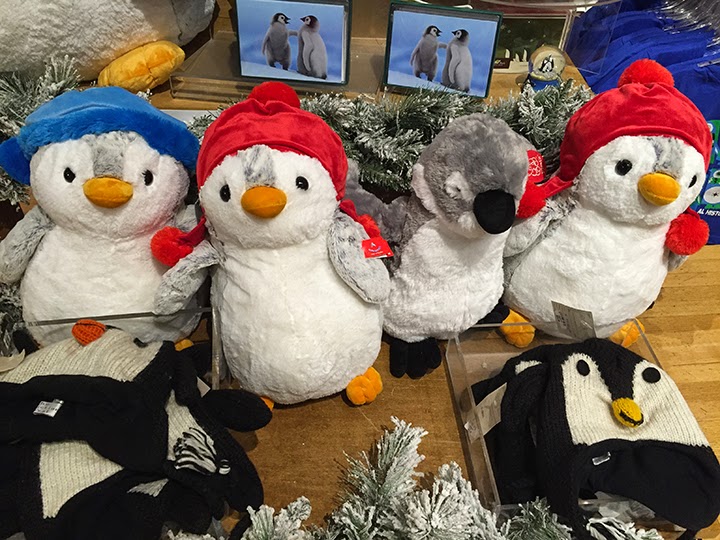 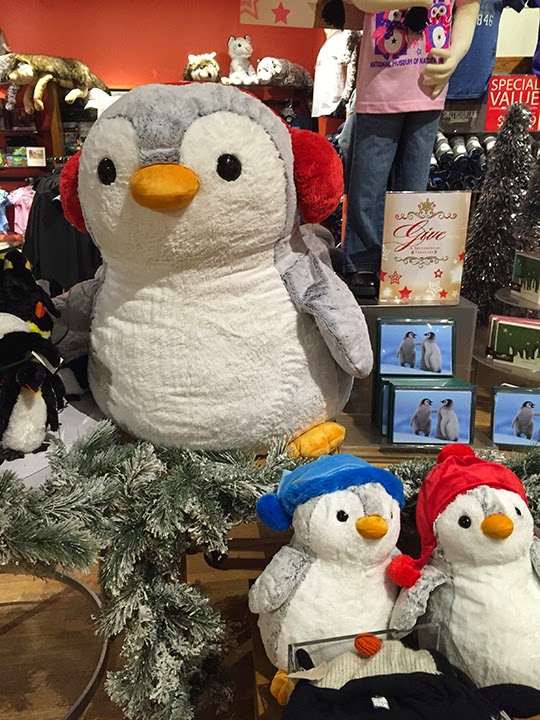 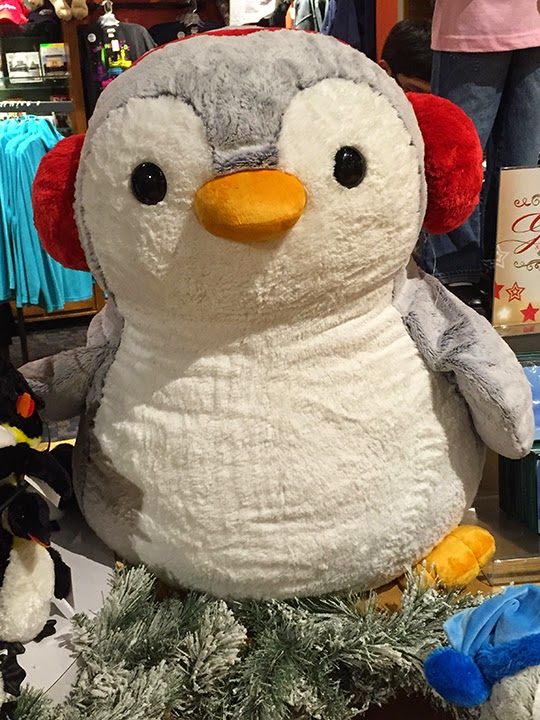 A little more on the rink:


The 2014–2015 ice-skating season at the National Gallery of Art Sculpture Garden Ice Rink on the National Mall will begin November 14, 2014 and continue through March 16, 2015, weather permitting.

This season, Guest Services offers an exciting new program and broad range of skating lessons for all ages, taught by Emme Porter, Bruce Porter, and their team of instructors, who together have more than 25 years of teaching experience, in addition to their backgrounds spanning figure skating, ice dancing, choreography, hockey, and more, on local, national, and international levels. 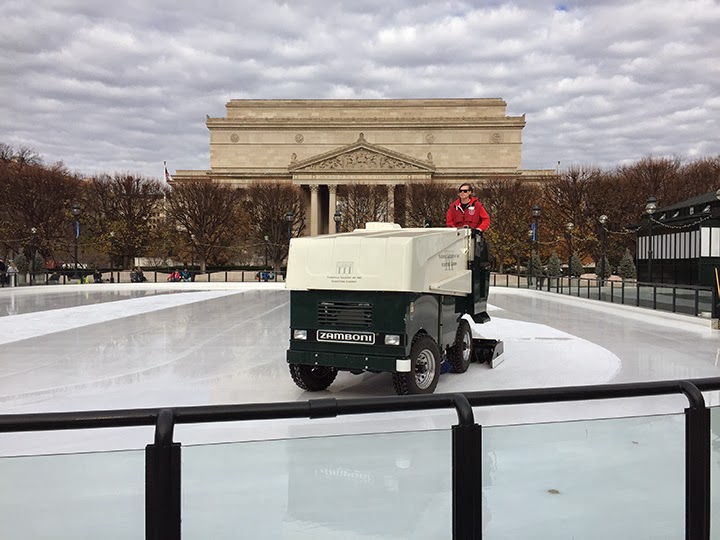 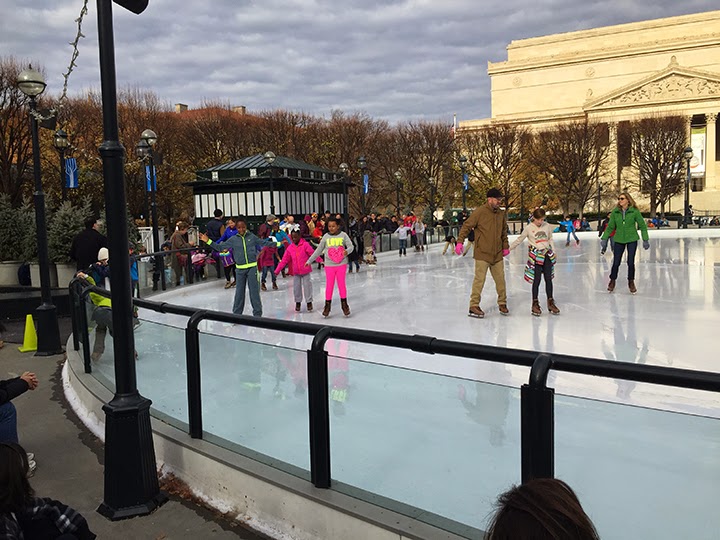 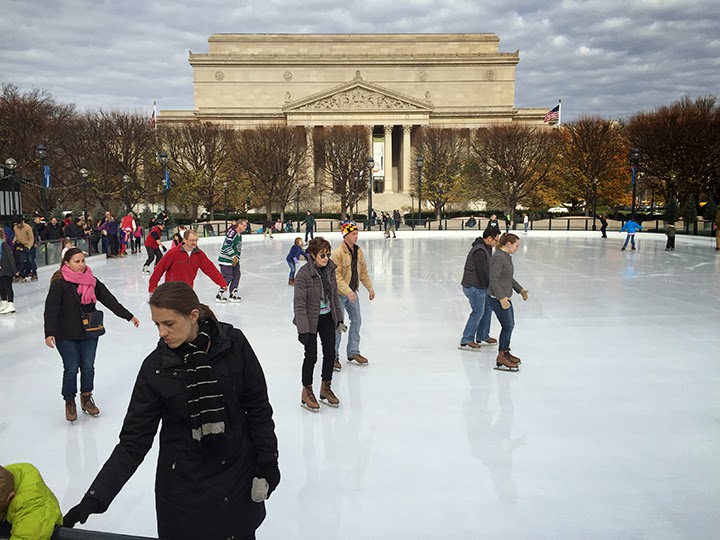 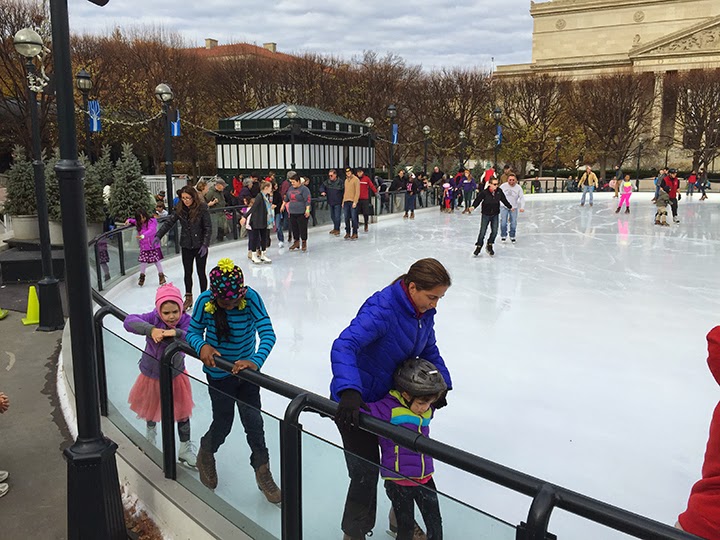 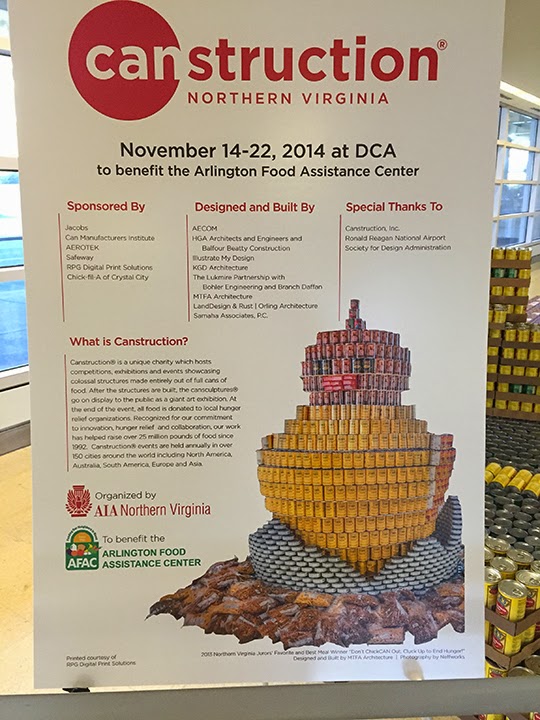 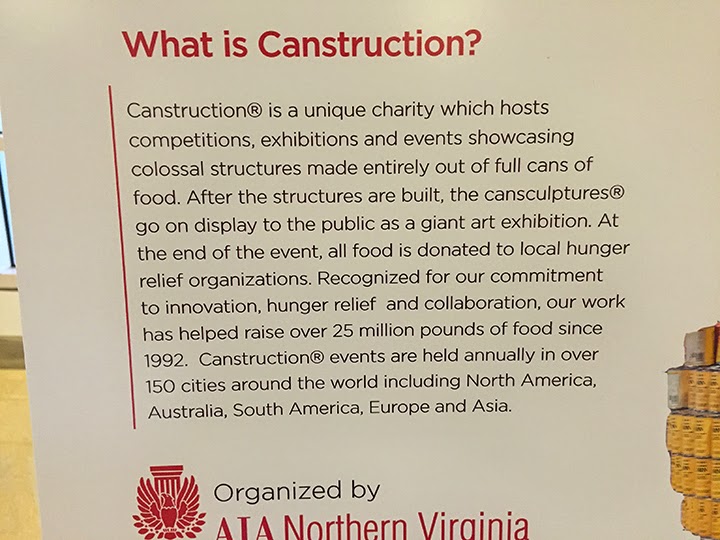 Canstruction® is a unique charity which hosts competitions, exhibitions and events showcasing colossal structures made entirely out of full cans of food. After the structures are built, the cansculptures® go on display to the public as a giant art exhibition. At the end of the event, all food is donated to local hunger relief organizations.

Recognized for our commitment to innovation, hunger relief and collaboration, our work has helped raise over 25 million pounds of food since 1992. Canstruction® events are held annually in over 150 cities around the world including North America, Australia, South America, Europe and Asia.


This was at baggage claim area at National Airport. I went on Saturday and saw it. Very cool.

This is about the Jayson Werth gnome:


Over the weekend, a group of 10 people created a nine-foot replica of a Jayson Werth gnome at Reagan National Airport using $3,800 worth of canned seafood.

Why did they do this? Well, it’s part of Arlington’s annual Canstruction competition, running this year from Nov. 14 through Nov. 22 at the main terminal’s baggage claim. Canstruction competitions, held in about 150 cities, feature large sculptures made out of full cans of food; after the events are over, the food is donated to local hunger relief groups.


Here are some pictures. What was interesting was the farther back you got the more in focus the image became. If you go up close to the Werth gnome you didn't get any of the detail. 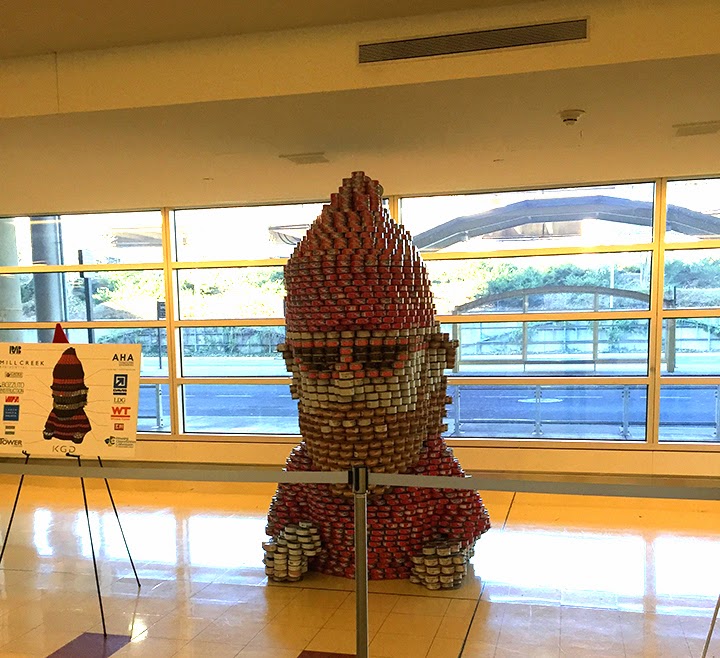 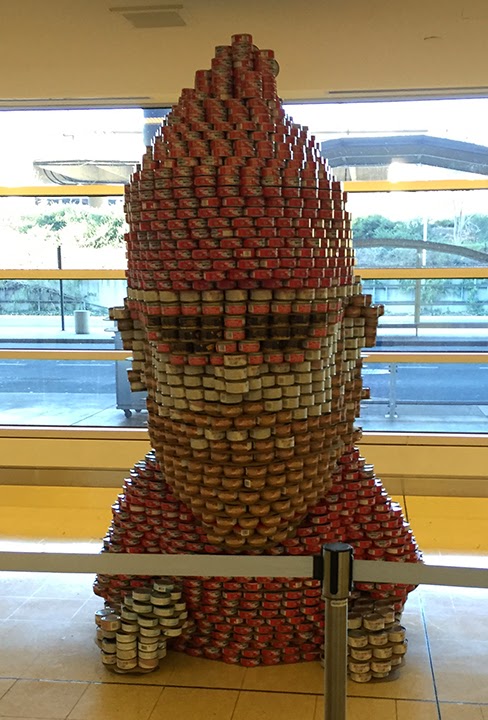 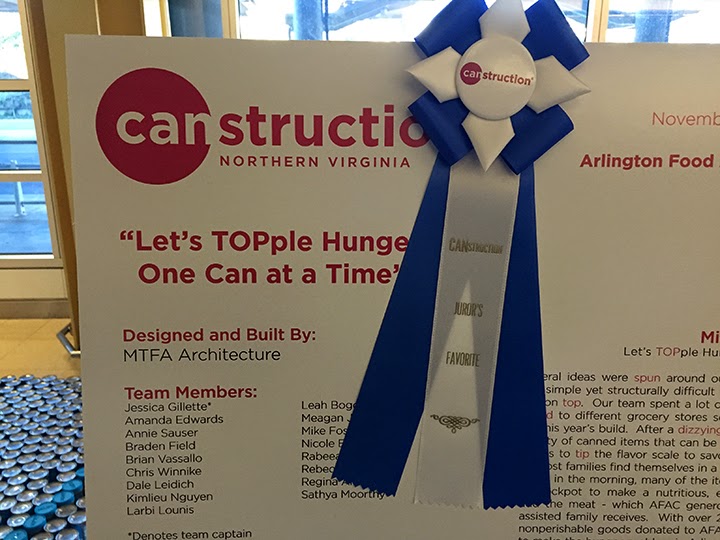 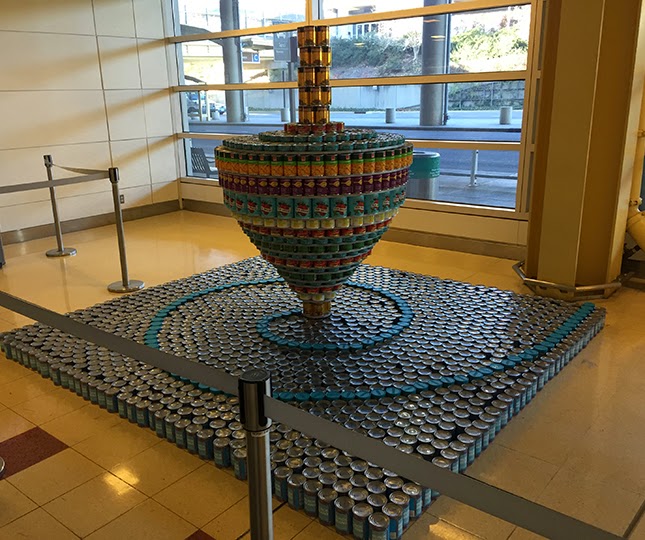 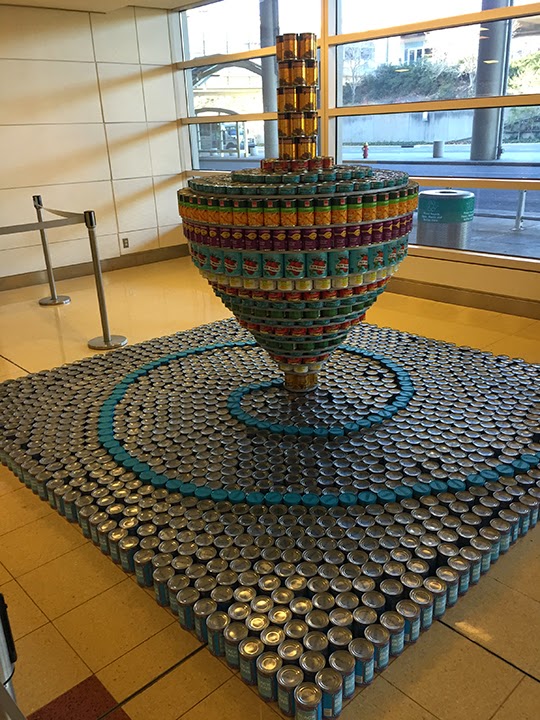 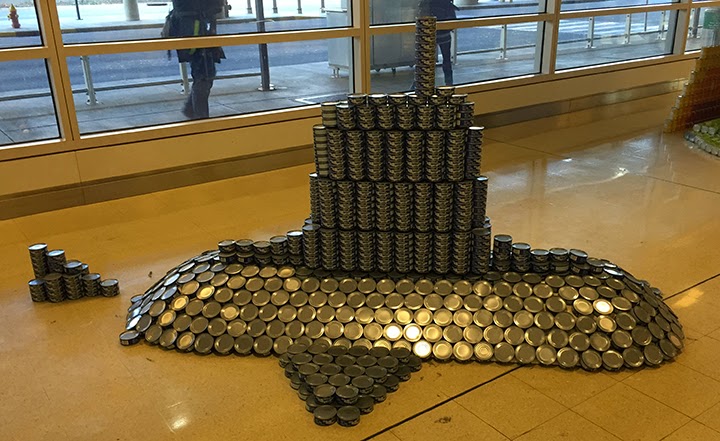 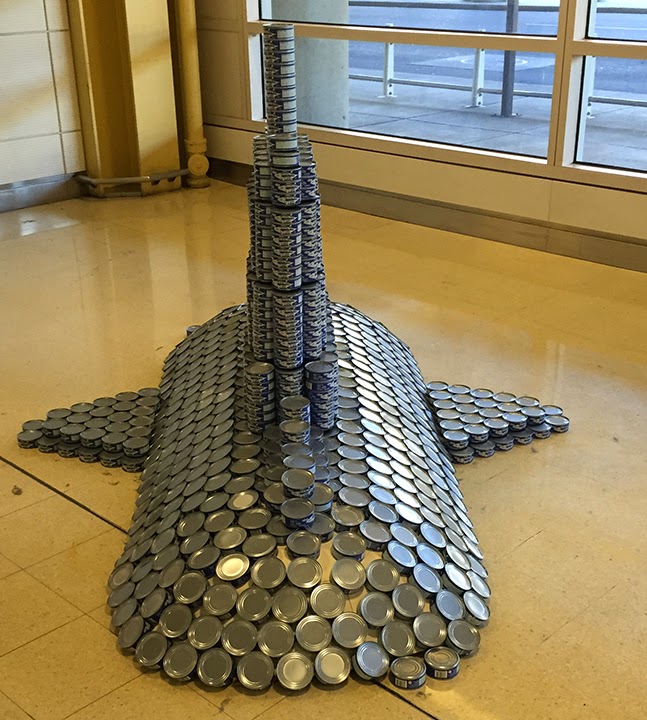 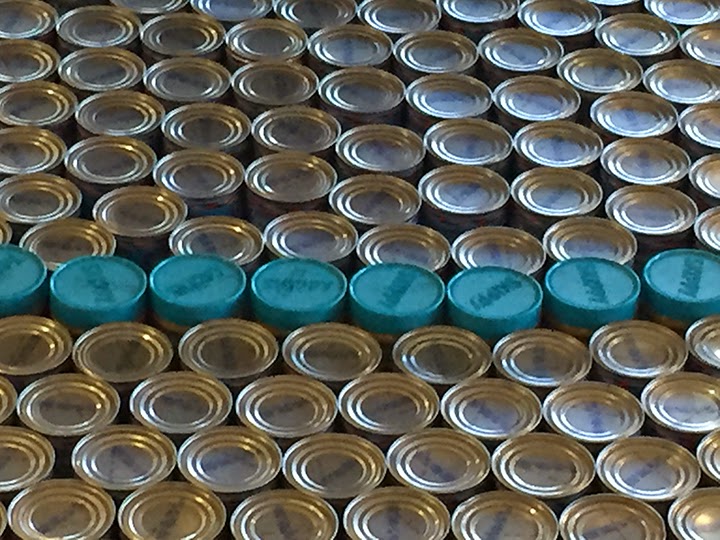 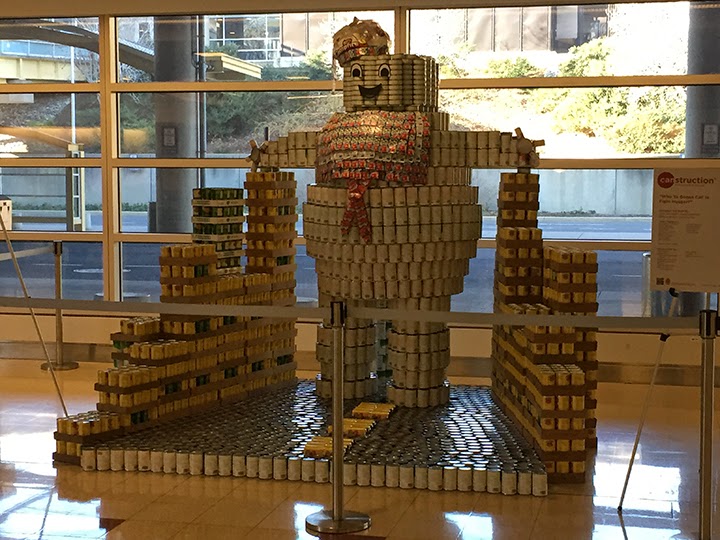 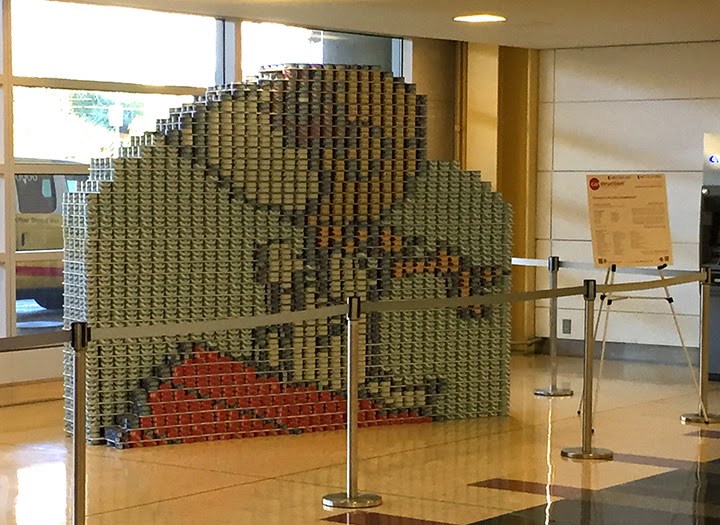 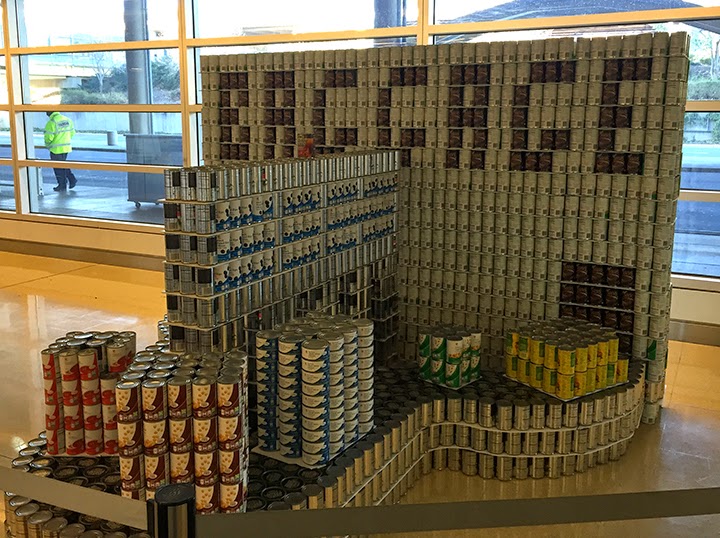 Looking for a Forever Furry Feline Friend — This Adoption Event is for You! 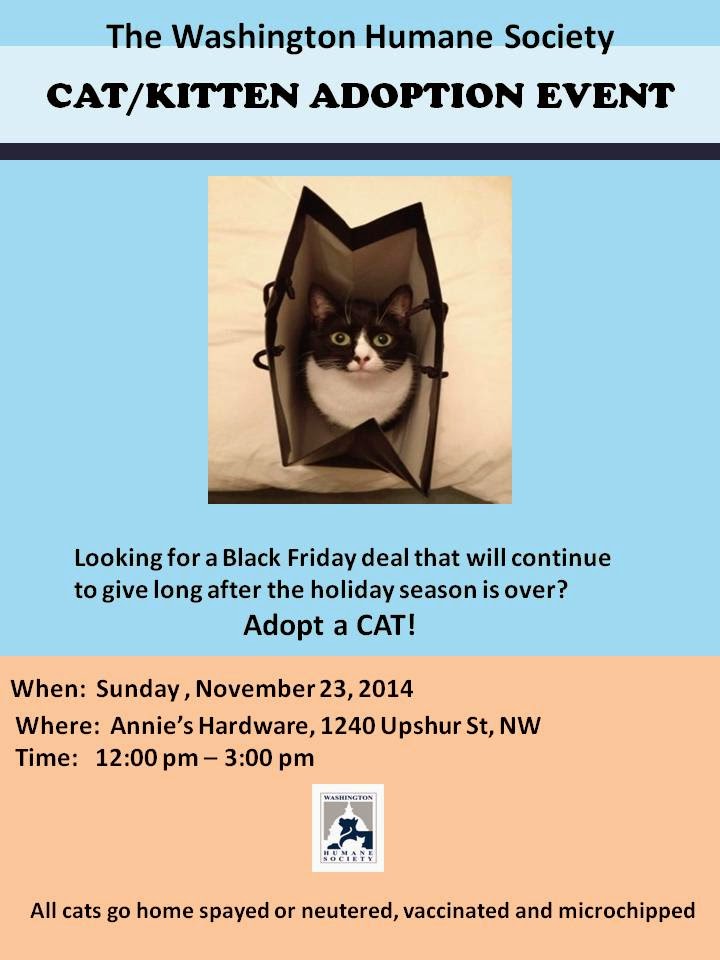 My friend, Yolanda, is a volunteer with the Washington Humane Society. She's sponsoring a cat adoption fair this Sunday.

So if you are looking for a furry friend and companion, stop by the fair this Sunday and see all the wonderful cats ready to be adopted.

More about the Humane Society:


The WHS Mission
The Washington Humane Society inspires and creates a community where all animals have secure homes and where people and animals live together with joy and compassion.

About WHS
The Washington Humane Society (WHS), the only Congressionally-chartered animal welfare agency in the United States, has been the area’s leading voice for animals since 1870. As the open-access shelter in the Nation’s Capital, the Washington Humane Society provides comfort and care to over 43,000 animals each year through its broad range of programs and services including sheltering for homeless animals, a comprehensive adoption program and off-site adoption events to find new families for the animals in our care, low-cost spay and neuter for pet owners and other local organizations, an aggressive TNR (trap-neuter-return) program for feral cats (CatNiPP), investigations of each allegation of animal cruelty or neglect through the Humane Law Enforcement, lost and found services to help reunite lost pets with their families, pet behavioral advice to help resolve issues that lead to animals being relinquished to shelters, working with breed rescue groups to find more homes for more animals, volunteer and foster programs to allow other members of the community to help us help more animals and an award winning Humane Education program that teaches kindness to animals to the next generation of animal lovers.


I just love the picture she found for this month's event!

You can also follow Petworth Monthly Cat Adoption Event on Facebook.
Posted by Jason in DC at 7:01 AM No comments:

At the end of the High Line is Gansevoort Market. Another great find on our walk down the High Line. More on the market:

It had a wide range of things to eat. Pizza, sandwiches, crepes and some really great snacks. 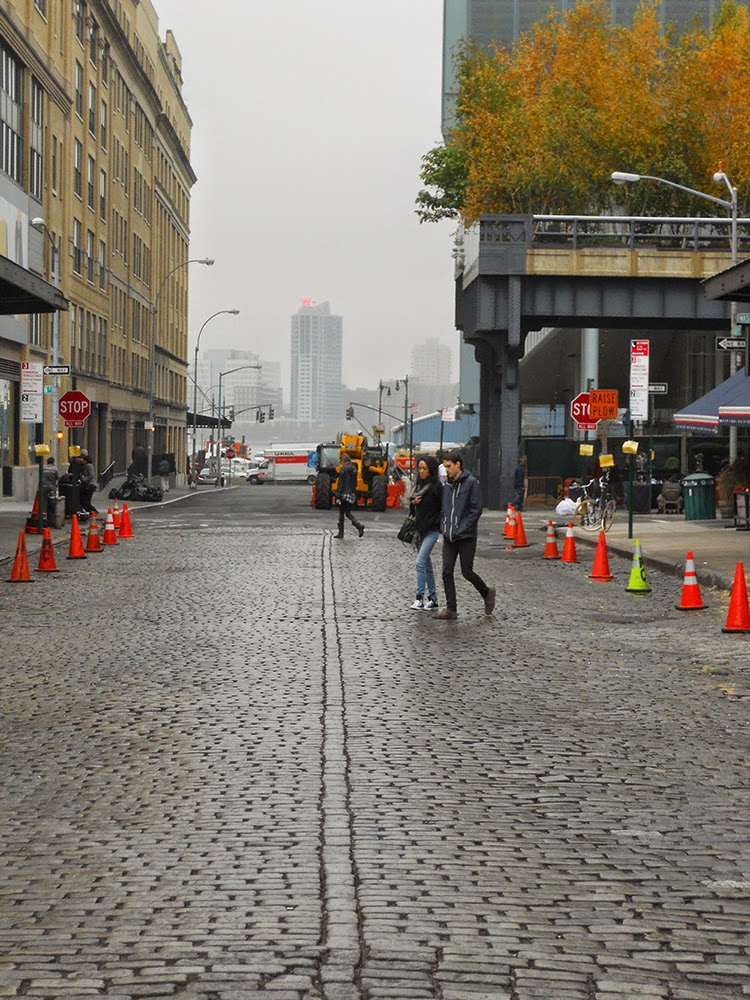 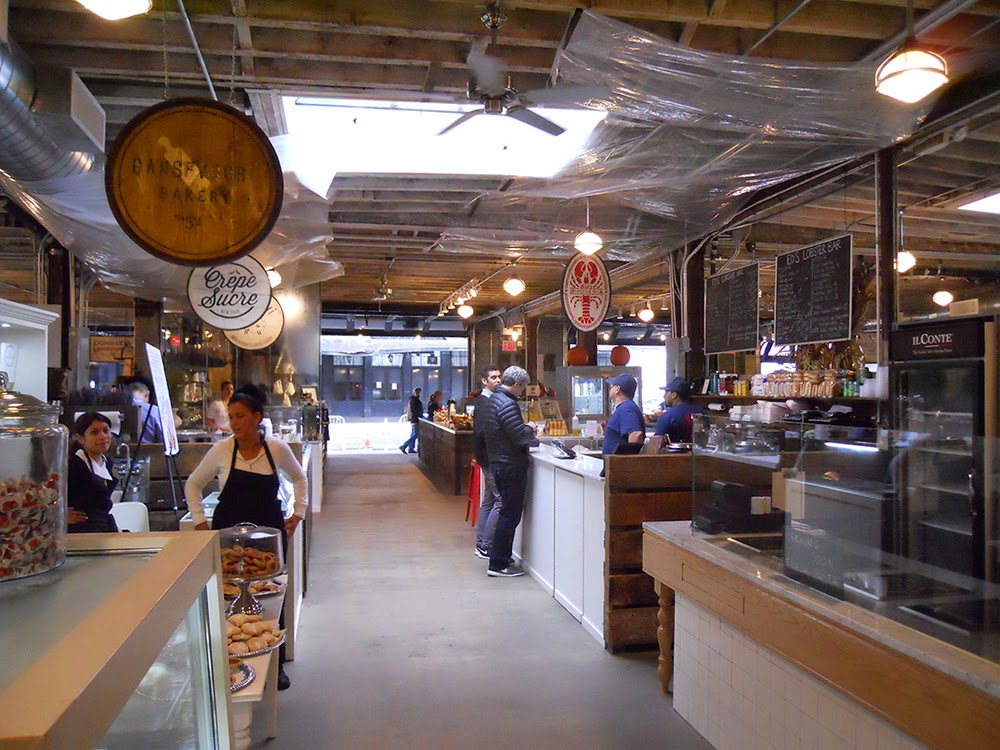 What a really cool park. One of the most unique that I’ve seen. The High Line is:


A little more on the High Line:


The High Line Park uses the disused southern portion of the West Side Line running to the Lower West Side of Manhattan. It runs from Gansevoort Street – three blocks below 14th Street – in the Meatpacking District, through Chelsea, to the northern edge of the West Side Yard on 34th Street near the Javits Convention Center.


Here are some pictures of the walk Denis and I took on the High Line. 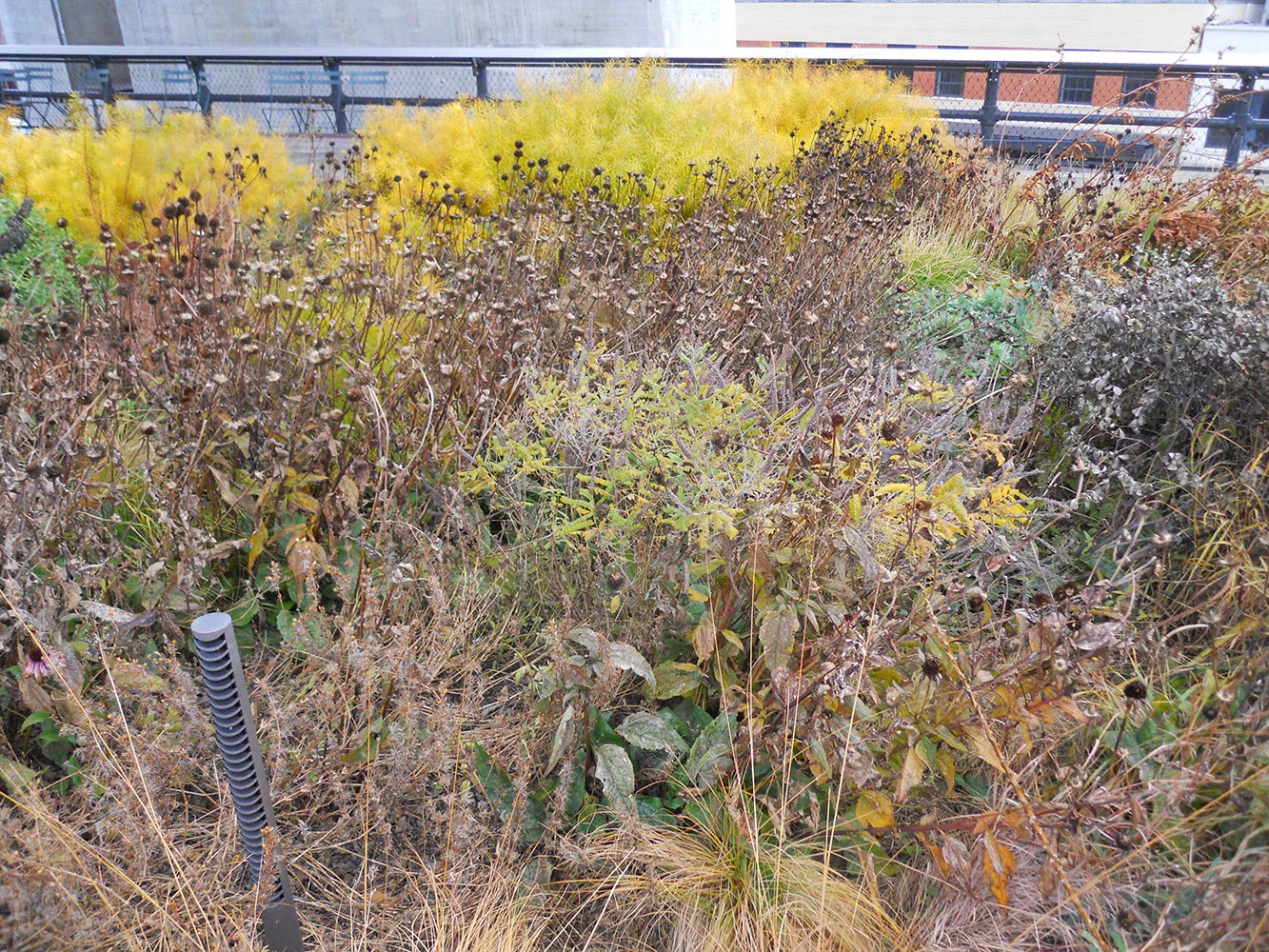 More from the wonderful High Line.

To get us through to next Monday when it's supposed to be almost 70 in DC, here are a few Peanuts cartoons.

Everybody keep warm with a smile.