This is the first Battle of Memphis. This one was fought on the water. The water was the Mississippi River right near Memphis. This was the start of the Union's drive to gain control of the Mississippi River and cut the Confederacy in half. A major goal of the Union. Eventually the idea was to capture New Orleans one of the major ports in the Confederacy.

Here's some more information on the battle:

After the Confederate River Defense Fleet, commanded by Capt. James E. Montgomery and Brig. Gen. M. Jeff Thompson (Missouri State Guard), bested the Union ironclads at Plum Run Bend, Tennessee, on May 10, 1862, they retired to Memphis. Confederate Gen. P.G.T. Beauregard ordered troops out of Fort Pillow and Memphis on June 4, after learning of Union Maj. Gen. Henry W. Halleck's occupation of Corinth, Mississippi. Thompson's few troops, camped outside Memphis, and Montgomery's fleet were the only force available to meet the Union naval threat to the city. From Island No. 45, just north of Memphis, Flag-Officer Charles H. Davis and Col. Charles Ellet launched a naval attack on Memphis after 4:00 am on June 6. Arriving off Memphis about 5:30 am, the battle began. In the hour and a half battle, the Union boats sank or captured all but one of the Confederate vessels; General Van Dorn escaped. Immediately following the battle, Col. Ellet's son, Medical Cadet Charles Ellet, Jr., met the mayor of Memphis and raised the Union colors over the courthouse. Later, Flag-Officer Davis officially received the surrender of the city from the mayor. The Indiana Brigade, commanded by Col. G.N. Fitch, then occupied the city.  Memphis, an important commercial and economic center on the Mississippi River, had fallen, opening another section of the Mississippi River to Union shipping.


The city of Memphis allowed the Union to control the Mississippi River down to Vicksburg where one of the major and most important battles of the Civil War would take place in June of 1863.
Posted by Jason in DC at 8:46 PM No comments:

I Got My Spots Checked (Going to the Dermatologist) )

I went to the dermatologist today. Or as I like to call it I got my spots checked. I am what you could call the melanoma poster boy wanna be. I have blond hair (well what's left of it is blond). I have blue eyes. My skin is light colored. I have had in the past when I was a kid some very bad sun burns. As an adult I've had a couple too. Thankfully there is no history of skin cancer in the family.

So I try and wear sun screen if I'm going to be out in the sun for long periods of time. I getting used to wearing a hat since there is very little hair left on the top of my head. I also try and stay out the sun on really hot days. That is the worst part of the day from noon to 3 or 4. And lately that's been most days.

So today I went to my dermatologist. It had been two years since my last visit. Everything is fine. He said coming every two years is fine. But should I see something that worries me, don't wait come in as soon as possible. I was a little concerned about something on my neck and also realized it was time to get my spots checked.

Below is some helpful information on looking for and spotting potential spots that need checking.

Cats in a Bag

Charlie and Linus get comfortable to watch the Olympics. What better way then in a bag.

They thought the Opening Ceremonies went a little long but loved the part the Queen played.

Here is a very funny series from Peanuts on baseball as Linus and Lucy try to buck up Charlie Brown's confidence. In light of recent events it nice for something to bring a smile to one's face.

Email ThisBlogThis!Share to TwitterShare to FacebookShare to Pinterest
Labels: Peanuts

It took me a while to get this map scanned. Thanks to my friend Arthur for getting me a file that actually works.

The map has some really good information about what to see when you visit. Click on the image to make it larger. 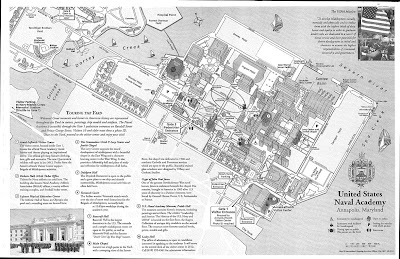 I've been interested in the Civil War for a long time. Living in DC, it is hard not to be interested in it since so many of the battle fields are so close to the city. After all Bull Run is about less than a 30 minute drive from DC depending on the traffic.

I decided since it was the 150th anniversary of the Civil War to try and do entries on the battles major and not so major on the days in which they happened. Best laid plans don't always come out that way. I'm going to attempt to play some catch up with that over the next few weeks.

Here's a major battle whose anniversary happened back at the end of May/beginning of June: Seven Pines.

This was part of the Peninsula Campaign to move up the peninsula Richmond was located on and capture Richmond. The idea was that would some how end the war or at the very least be a huge blow to the Confederacy.

The commanders on the field were: Confederate: Joseph E. Johnston; (William) Dorsey Pender; James J. Pettigrew and for the Union: George B. McClellan.

Details of the battle:

The Armies mustered around 84,000 men available.

On May 31, Gen. Joseph E. Johnston attempted to overwhelm two Federal corps that appeared isolated south of the rain-swollen Chickahominy River. Johnston readied a plan that was not well suited for the variety of commanders he had – several had only recently joined his army and were not used to his style. Nor did he spend much effort to make sure his subordinates understood their roles.

The advance started late, and got confused. Instead of an early-morning attack it was 1 pm before even part of the Confederate force got into action. For a time the fight around Seven Pines see-sawed back and forth, and if more of the available rebel troops had attacked they would likely have carried that part of the field. Meanwhile at Fair Oaks the fighting yielded no advantage to either side until Sumner (acting without orders – neither McClellan nor Johnston did much commanding during the battle) took his troops over the available bridge. They arrived to smash a developing Confederate attack and make sure the Union held the field.

Late that day Johnston was badly wounded and G W Smith, the senior division commander, took over. Smith changed the plan a little for the next day. He would aim north towards the Chickahominy bridges rather than just driving the bluecoats east. But Longstreet (who’d botched his attack on the 31st) did it again on the 1st, moving east. Moreover, he moved weakly and achieved almost nothing. (McClellan had reinforced, so the whole basis of the attack – the vulnerability of the Union left – was altered.) Robert E. Lee arrived in early afternoon with a piece of paper that would affect the rest of the war: orders to take command. He broke off the action – it was going nowhere – and that night pulled the disappointed, mishandled troops back into the Richmond defenses.

Both sides claimed victory, but if this was the best the South could do they were doomed: McClellan would take Richmond by siege.

The Heat Takes a Toll

Today DC is going for its seventh 100 degree day of the year. Oh yeah!

The Dog Days of August are alive and well in mid-July. Yeah, we’re more used to this now than we were earlier in the summer. But it’s still hot and gross, especially if you have to walk more than a block to or from the bus, metro, or whatever your mode of transportation.

And it really does take a toll on you. As I’ve said before, the short walk from my office to the subway and then the subway to my house is really not all that far. But by the time I get there well I’m reduced to a moist towelette. The first thing I go when I get home is change my clothes. Well actually the first thing I do when I get home is turn on the air conditioning.

The heat just wipes me out. Can’t seem to do much of anything. I eat dinner and then just veg out. At least what I did during the last heat wave. This time I decided to try and do something when I got home and after dinner. I find this time around I feel a little less tried at the end of the day. I’ve started back on the Wii Fit. I try to do between 20-30 minutes each day. It’s been a little sporadic at the start but I’m getting better at doing it when I get home.

I still find it hard to do a post. It requires a little more thinking than I’m willing to do at the end of the day. But I’ll do my best to post on a more regular basis.
Posted by Jason in DC at 9:38 PM No comments:

Until the cool down here's a Peanuts to make you smile and cool you down. 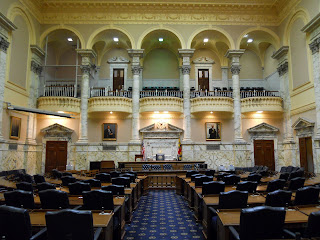 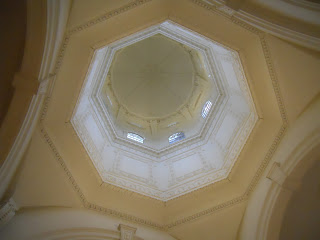 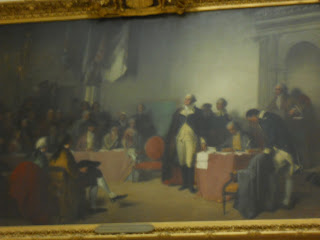 On the Severn River

We had a leisurely walk down to the dock in the Annapolis Harbor and got our tickets for our boat ride on the Harbor Queen. This is 45 minute tour in and around Annapolis. It takes you by the Naval Academy. It had gotten a little sunnier by now. Not too hot and there was a very refreshing breeze. 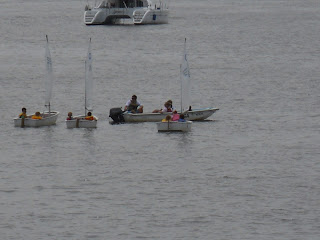 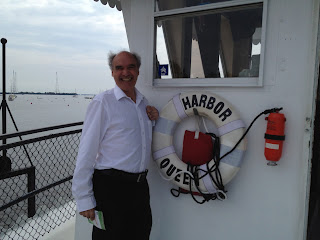 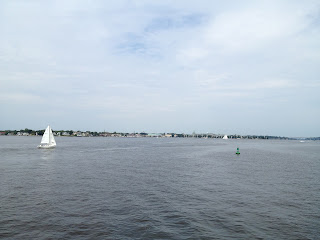 More Views from the Harbor Queen

Some additional views of Annapolis from the deck of the Harbor Queen. 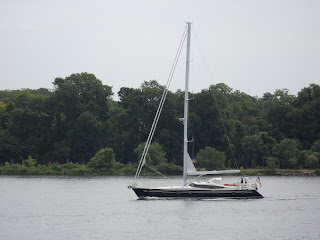 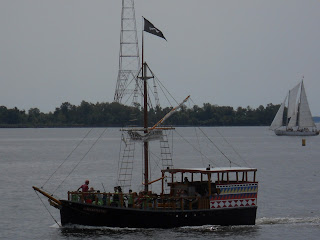 On the Grounds of the Naval Academy

We had lunch after the boat trip. I had a salmon BLT. It was great. Then we walked over to the ground of the Naval Academy. 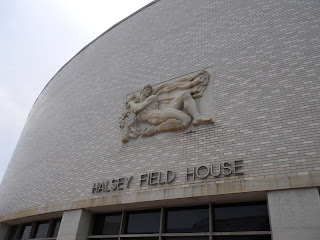 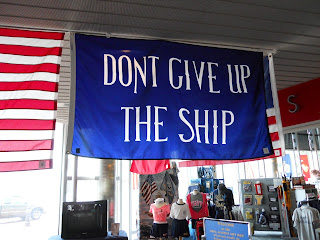 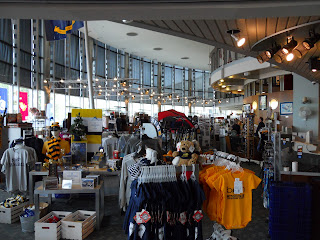 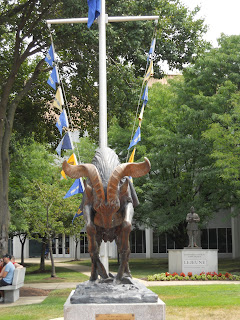 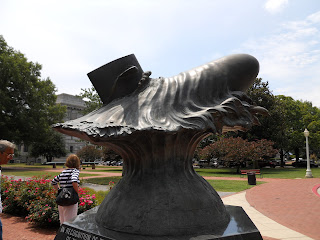 Running Into Some Midshipman

Ran into some of the first year midshipman drilling on the grounds. The Plebs arrive early before the rest of the classes to get some basic training and learn they way around the Academy. 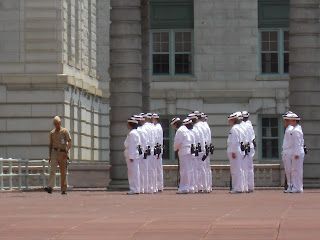 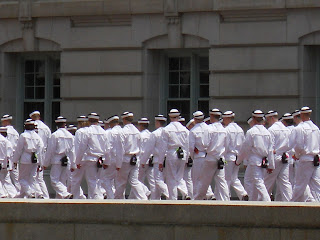 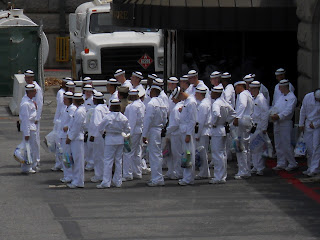 Around the Naval Academy Campus 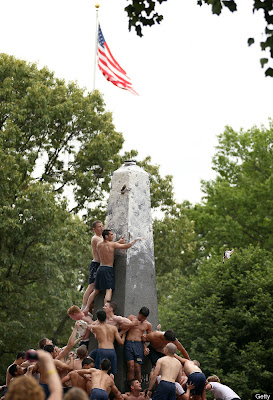 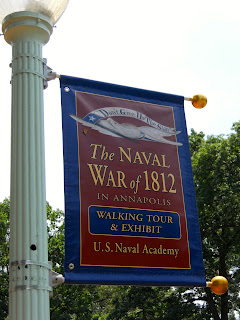 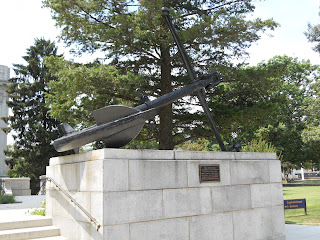 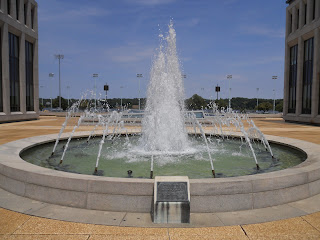 This really is a spectacular chapel. 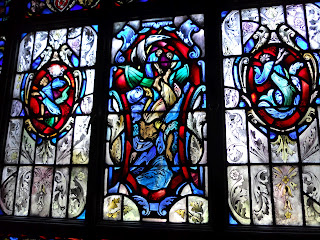 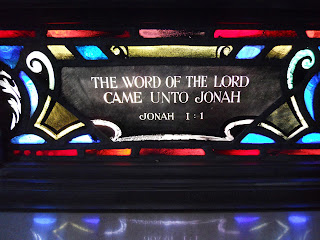 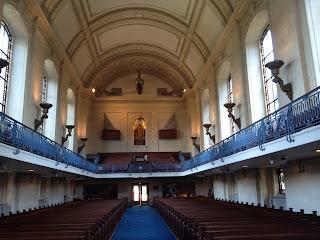 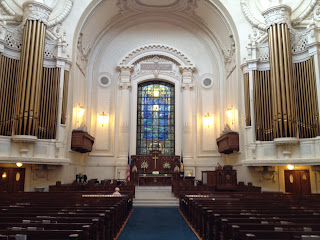 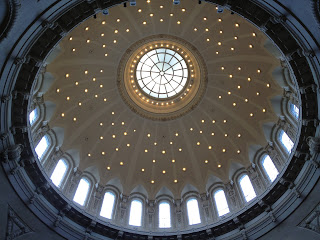