The second day of the ride was canceled. What was left of Hurricane Ike roared through the area early Sunday morning. Dumped a great deal of rain. The concern was local flooding of roads and low areas. Also the wind.

People in general were sad about it. Most of the people staying at our motel were doing the ride. A sign was posted at the front entrance saying the ride for the day had been canceled.

I rode over to the school where the ride was being staged with a Jennifer and a friend of hers to get their bikes. The playground space behind the school was used to house the bikes. Most of them had already been picked up by the time we got there. Many of the riders had people who drove down to where they were staying. I think many were concerned about the storm. So they loaded the bikes onto their vehicles. Others were having the bikes shipped back to where they started the ride and were then going to take shuttles back to that town.

We got their bikes into Jennifer's friend's pick up and then went inside to have some of the pancakes they were serving. Once we were done we headed back to the motel. We got the bikes all squared away and then looked in to see if Ed was awake yet. After a little while we all headed over to Denny's so Ed and dad could have breakfast. And since we were there Jennifer and I had a little something too.

A little after 9:30 we headed back to Springfield. Now we are relaxing some and watching football. A little later this afternoon we plan on going out and doing something. Then cooking out at Ed and Jennifer's. 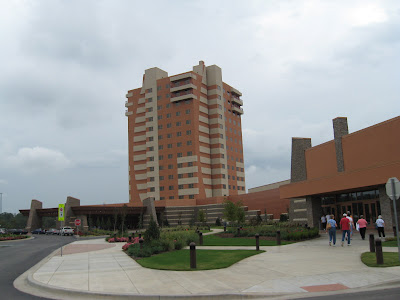 A picture of the Downstream Casino and hotel. The hotel has yet to open. 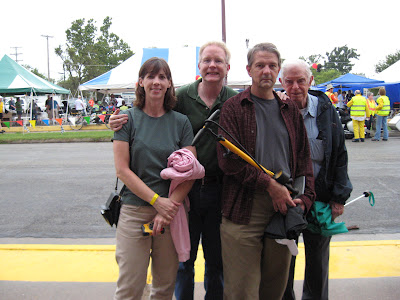 Here we all out outside the school where the ride ended for the day on Saturday.
Posted by Jason in DC at 3:01 PM