Diane Sawyer at the Kalb Report 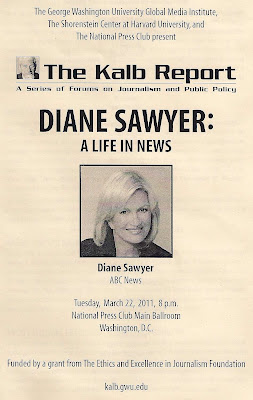 I went to the final Kalb Report for the season on Tuesday.

It was a very interesting discussion of Diane's career. Also insights into how down sizing has had an impact on the news room at ABC. She said she doesn't follow ratings and doesn't have an idea of how much things cost. For an example, she said she had no idea the cost of sending the entire World News crew over to Japan to cover that story.

She also thought that the American public was able to tell the difference between fact and opinion in news. This was in response to a question from Kalb about the impact of Fox News. Sawyer added that she might sound like a Pollyanna in this case but that's how she feels. Personally, I think she might be a little too optimistic on this.

During the Q and A she was asked how she copes with the disasters that she covers. She said it did get to her but felt it was her duty and responsibility to tell the stories of the victims of these tragedies. 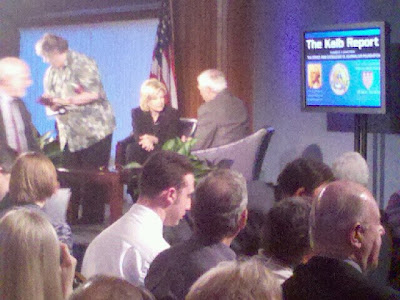