Every Four Years at the Newseum

It's election time again. The Neweum has a great exhibit on it called Every Four Years.

Here's some more information about it:

The Newseum's new election-year exhibit, "Every Four Years: Presidential Campaigns and the Press," explores how media coverage of presidential campaigns has evolved from William McKinley's 1896 front porch campaign to Barack Obama's 2008 Internet campaign, as candidates and reporters tangle over issues, images and control of the story.

The exhibit features interactive activities and an original video on televised campaign ads, shown on a 100-foot-wide video screen in the Robert H. and Clarice Smith Big Screen Theater. 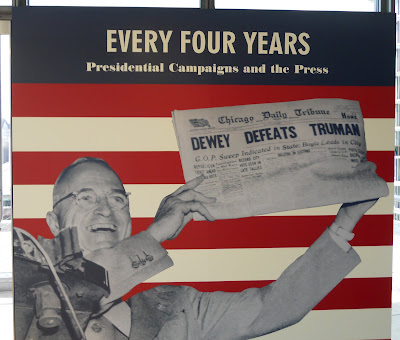