Battle with the Toilet

That's what I had this morning a battle with the toilet. Of course not just any toilet it was the toilet in my bathroom.

I used it early this morning. Flushed it. The water didn't start running to fill it up again. Well actually it did but there was so little water coming out it would have taken hours for the toilet tank to fill up again.

Great I think. It is right about 5:30 in the morning. I start thinking what am I going to do. Home Depot doesn't open until 8 am. I go back to be for a little while.

I get up maybe 10 minutes later. I use the waste paper basket in the bathroom to fill up the toilet tank. I'm going to flush the thing again and maybe the refill tube will work properly. The refill tube is the little piece of tubing that goes from the fill valve and connects to the over flow pipe. This is what the water comes out to refill the toilet tank.

I flush nothing happens. No water comes out of the refill tube. There is a very small amount of water that drips off the fill valve. As I recall some choice four letter words come out of my mouth.

Once again what to do. I want to start and try and get this thing fixed right away I don't want to wait until Home Depot opens. I think on this for a little while longer. I then remember that I just might have a Fill Valve kit somewhere.

I go down into the basement. I actually find a Fill Valve kit. I think well maybe just maybe I might be able to do this. After all how hard could it be ( as it turned out plenty).

I open the package and I make sure that I have all the parts. Turns out I do. Then I read the instructions. Here's what number one says:

Now that seems pretty straight forward. I flush the toilet. Get up the excess water. They go do remove the old fill valve. The diagram with the instructions show the old assembly being lifted out of the toilet tank. Not how you disconnect the thing. I'm stumped here.

I go downstairs and Google replacing well you get the idea. Seems removing the old assembly isn't all that simple. Here's what I found later on-line:

Easier said then done. The water line is of course underneath the toilet. It is also in just about the most inaccessible part of the whole damn bathroom. I have to get a wrench in there some how to loosen the lock nut and coupling unit (see I learned toiled aren't you proud of me). I have to jam myself in a very small space between the wall and the toilet. I've taken off my shirt because I'm on the floor and there's water and it seemed silly to have a shirt on when it is going to get all wet. I'm really really sweating. I wedge myself into the space to get to the old assembly. But the probably is I'm sweating so much I'm literally sliding down the wall.

It takes me a while to do this but I get it done. Out comes the old assembly. I'm actually feeling proud of myself. I think half way there. This should be easy now (what was I thinking!)

I put the new Fill Valve in. At least I try to. I'm a little confused by the instructions exactly what you are supposed to do. I begin to feel that I don't have all of the parts. I read the instructions very very slowly and carefully. This is what I figure out.

There are two parts something called the Shank Washer and something called the Cone Washer. The Shank Washer goes inside the toilet tank at the bottom of the Fill valve. It creates a seal so the water won't drain out of the tank. Depending on the connection you have from the water shut-off valve to the toilet you may or may not use the Cone Washer.

The thing is these two pieces are attached to one another. I Shank Washer is about an inch or so across. The Cone Washer at the most a quarter of an inch. They are both made of rubber. They are made as one piece. You're supposed to punch out the Cone Washer from the middle of the Shank Washer. Thus making both parts usable. The picture in the directions for this is terrible. It shows this process from the side so it is hard to figure out which piece is which as you can see below. 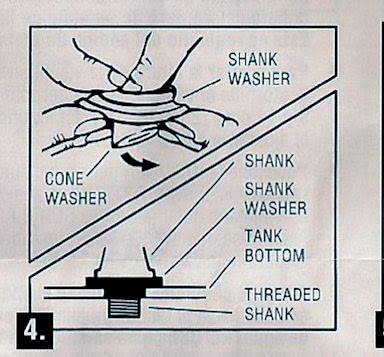 I get the two pieces apart. I'm really concerned that I'll somehow ruin both. Turns out I don't do that. I then get the Fill Valve in. I connect everything back up. I turn on the water. Water starts leaking out of the connection into the toilet tank.

I won't go into all the details or all the choice words I used. I turn the water back off. I try and tighten Lock Nut and the Coupling Nut but even after that water is still coming out. I get even madder if that is possible to imagine. I think to myself maybe I can try and take that thing off and start over. But I'm not able to do this.

For some reason I don't know why I turned the water back on and no water leaks out of the tank. Some how I've fixed it. And that was my battle with the toilet this Sunday morning.
Posted by Jason in DC at 3:21 PM

Nice Blog !! Thanks for sharing with us.