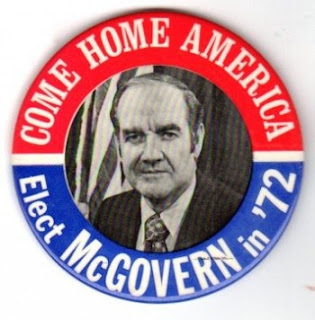 My most vivid memory of McGovern is staying up to watch his 1972 acceptance speech. It was very very late. I thought it was maybe at 1 am but from reading about it in a couple of papers it was closer to 2 am where I was north of Chicago. For sure I remember watching it with my brother and I think my mother. I guess you could call it the high water mark of my liberalism. Or at least liberalism without asking any questions. I was after all only 13 at the time and kids are often very idealistic about what can and cannot be done.

This is from a piece by Bob Dole that appeared in the Post today:


I am sure there are some who were surprised by the long friendship that George and I shared. After all, before his death this weekend at age 90, he was a proud and unapologetic liberal Democrat and I am a lifelong Republican. As chairman of the Republican Party, I did what I could to ensure the defeat of his 1972 run for the White House. When the election was over, however, George and I knew that we couldn’t keep on campaigning forever. We also knew that what we had in common was far more important than our different political philosophies.


Mr. McGovern, who died Sunday at age 90, did not reinvent himself after his crushing defeat by President Richard M. Nixon in 1972. Just last year he published a book (“What It Means to Be a Democrat”) that restated some of the old McGovern themes but that was also surprisingly timely in the election season of 2012. “We Democrats believe people should be allowed to enjoy the fruits of their hard labor,” he wrote, “but we know that a two-tiered economy, where CEOs rake in billions for laying off their fellow citizens, is neither fair nor sustainable.”


I have to agree with the Post how timely his comments are. And how very true they are.

You’ll be missed George.
Posted by Jason in DC at 9:00 PM