So I thought the swimming relay would be the most exciting event of the games. But no!

How do you measure one hundredth of a second? I can't even imagine how to figure out how short of amount of time that is. It was such the right way for Michael Phelps to win his seventh gold medal. Here's the coverage from USA Today and the Post.

"I saw so many quotes saying it's impossible to duplicate it, it won't happen, and it just shows you that really anything can happen," Phelps said of tying the record.

Later on NBC's coverage they had both Michael Phelps and Mark Spitz on to. I have to say Spitz was incredibly generous. I think he was genuinely pleased that Phelps broke his record. It was just a fantastic interview. Here are a couple of quotes from Sptiz:

"I never thought for one moment you were out of that race. You represent such an inspiration to youngsters around the world.'' 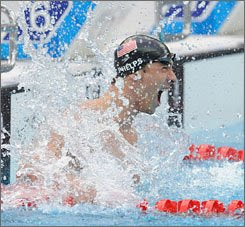 Email ThisBlogThis!Share to TwitterShare to FacebookShare to Pinterest
Labels: Olympics

I didn't see Phelps race, either because I wasn't watching at the time or because it wasn't broadcast here (I don't know, since I didn't see it!). However, I do very much know how short a period if time that is: Twins Georgina and Caroline Evers-Swindell took the gold medal for the women's double rowing. It was literally a photo finish, with a frankly agonising wait to see if New Zealand got gold or silver. I'm not much into rowing, but that was one exciting race (or, finish, anyway).

One minor quibble, though: If Phelps has now won 7 gold medals at one Olympics, that means he's tied Zpitz' record, not broken it, no? In any case, not surprisingly, probably, Phelps isn't as big a story here as in the US (though his wins do make the headlines).