Clash of the Titans, Sneak Peak 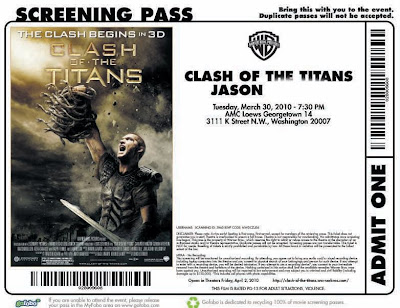 I got to go to an early screening of Clash of the Titans. I won two free tickets to it. It was at the theater in Georgetown.

I met up with a friend at the Foggy Bottom Metro stop and we walked into Georgetown. We had dinner at Mr. Smith's and then headed over to the theater. We didn't see a line when we came in and so I asked if people were in line yet. I was told yes and that I probably should get in line right away. So we hoped on line. The line was off on one of the hallways that you couldn't see form the entrance.

The line continued to grow. We started speculating on if we'd get into the movie at all. It ended up we were some of the last people to get in to see the movie. And there were many people still standing in line. About the only seats left were right in the front row. But then the people running things came along and said if you are saving a seat for someone who's still in line they aren't going to make it in. So that freed up some seats and we got to move back a couple of rows. It made a big difference. The 3D was pretty cool. Bu the movie was not shot in 3D it was made into a 3D film. I'd say if you were paying to see the film go with the regular 2D.

As for the movie, it was fun. Sam Worthington starts as Perseus. Liam Neeson is Zeus and Ralph Fiennes is Hades. Fiennes is once again the bad guy and plays him to the hilt. The effects are very good especially when they battle the scorpions. They are pretty faithful to the original movie. The last scene with the kraken is very well done. So I would recommend seeing this movie but like I said I'd see it the old fashion way in 2D. I just don't think the retrofitted 3D would be worth the extra money.

Here I am looking silly in my 3D glasses. 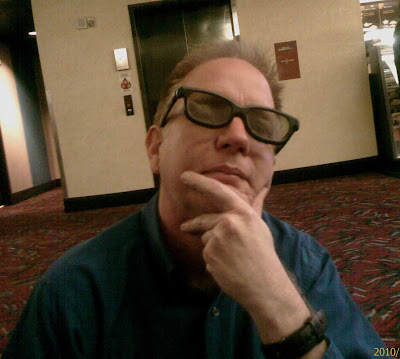