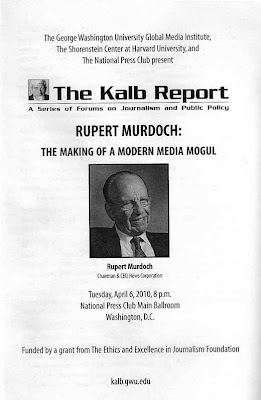 The final Kalb Report was last week. And they pulled out all the stops by landing Rupert Murdoch. Actually Murdoch was supposed to be in a program in February but all the snow delayed it to April.

It was a very interesting program. It was interesting to see his take on where he thinks newspapers will go. He thought the iPad might save newspapers (he even had one with him). He thought this will make delivery of content to people much easier. He also talked about how at some point papers will have to start charging people for content. He implied that maybe some things will be free while you might have to pay for other things. Murdoch was using the Wall Street Journal as an example. (Kalb at one point asked if he wanted to see the New York Times destroyed. Murdoch posed and then said no. More on that later.) He also said that places like Google and Yahoo news which had stories from the Journal are going to have to pay for content. Or have just the headline and then a link to the Journal story.

There’ve been several stories in the news lately that the Journal is going to be taking on the New York Times. In a couple of weeks the Journal will start covering local news in New York. This lead to a series of questions about Murdoch’s views on the New York Times. He said the Times definitely has a point of view. He added you can see that by reading the front page of the paper. He said the Times is a pretty liberal paper and the Journal was going to try and balance that out.

This of course lead to a discussion about Fox News. There were a couple of questions about it in the Q&A after the show. He thought Fox was fairly balanced. That it had Democrats on as commentators. Although he couldn’t name any. But to be fair, he’s not running Fox News on a day to day basis so why should he know that. But he didn’t really acknowledge that Fox tilts to the right. Some would even say to the far right.

Murdoch told a very interesting story about his father, Keith Murdoch. Keith Murdoch was a war correspondent and covered the Gallipoli campaign in the First World War. He reported on the command structure and just how bad things were going there. This started a process of calling for the withdrawal of forces and an investigation to the invasion.
This was part of a discussion on if it is a good idea to have journalist embedded with troops. Can the journalist keep their objectivity. Murdoch said he thought people could. Murdoch said there was a great deal of censorship of war correspondents but that all changed with Viet Nam.

Murdoch was very interesting. And made some very interesting points on where the future of news and especially the direction print media specifically newspapers were going. It was a great ending to this season of the Kalb Report.

Here’s a little about his appearance on the Kalb Report from a article from Vanity Fair.

Here’s something from the Daily Colonial

One final story from Guardian from England

Also there were several people that sat behind me that had lap tops and were typing every word Murdoch was saying.
Posted by Jason in DC at 5:23 PM

In the interest of full disclosure, I was once a teeny tiny cog in the vast machine that is Murdoch. And, I think Murdoch is full of shit.

He's not merely conservative, he's a reactionary. He knows damn well how far right Fox is—it's his creation (allegedly at the insistence of the wife he dumped; supposedly his current wide loathes Fox). As a staunch far-right curmudgeon, he wants Fox to be a Republican propaganda channel. His feigned innocence is, at best, disingenuous (I, far less charitable, think he was flat out lying when he pretended not to know what Fox really is).

Murdoch plans to put his newspapers' content behind "pay walls", and he will fail. People won't pay for what at least the past 15 years have taught them to think of as free. And let's be honest: There's nothing so special about his papers or their content that consumers can't find free replacements every bit as good—or better. They can, and they will.

That said, I actually agree with him that the iPad, or more likely its eventual successors, will save newspapers and will become the medium of choice for printed news delivery. That will only succeed if media conglomerates deliver compelling content, not the same old crap reheated and dished up stale, as Murdoch apparently plans to do.

Print newspapers are dying, and Murdoch knows that. He's simply trying to protect his profits as long as he can. He doesn't care about hard-hitting reporting, objectivity, standing up to power elites or any of the other things that are supposed to make journalism great. There's definitely a future for journalism, but Rupert Murdoch will have nothing to do with it.