A Little More on The Glass Menagerie 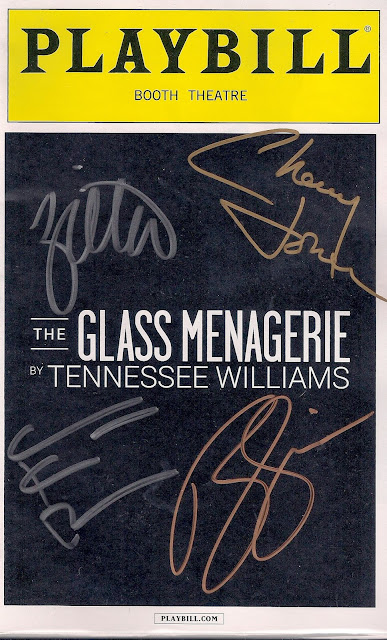 We came into the theater after the drama of the train tickets. As I was sitting down I got a message from Megabus saying that the bus had been cancelled. We felt very good in our decision.

I'm waiting for the play to start and I think to myself I haven't seen anyone famous yet. I always see at least one famous person.

I'm looking around the theater and I see someone. I recognize him but can't exactly think who it is. I point him out to Stu. He agrees with me. I remember him being in Clear and Present Danger. I get out my phone and look on IMDB to see if I'm right. Stu finally comes up with his name Donald Moffat. Just as he's saying that and I confirm that that is who is in another guy is coming into our row. He sits down three seats from me. Stu recognized him immediately and so did I it was Paul Sorvino.

But it gets even better. At intermission the guy sitting in front of Paul Sorvino turns around and introduces himself. I recognize him. Point him out to Stu who recognizes him as well. We have no idea who he is. But from the conversation I could here between the two of them, it sound like the guy got his first break working with Sorvino.

So ample famous people in the theater and all stacked right next to each other.

After the show, they did a fundraiser for Broadway Cares. As Brian J. Smith says it's rare to auction off one of the characters in the show but they would in this case. As an added incentive, Zachary Quinto would match the bid dollar for dollar. The character was the horse in the show. And the bidding started at $300. One woman bid that much. Then Quinto counter bid. It went to $750 with the proviso from the woman bidding that Quinto personally give her the horse.

If you gave $20 you got a signed program from everyone. For $60 you got a poster and I think a program too. It would have been cool to get the poster but I had no idea how I was going to get it home. So I gave $20 and got the program. I got to shake Cherry Jones had and say what an amazing performance it was. She thanked me very much.

As to our three famous people well Cherry knew all three. In fact the guy whose name we can't think of she knew the best because he got a kiss from Cherry.

And one final really cool thing as they opened the doors (there are exit doors in the back of the orchestra section that go directly to the street), it started to snow.
Posted by Jason in DC at 6:41 PM