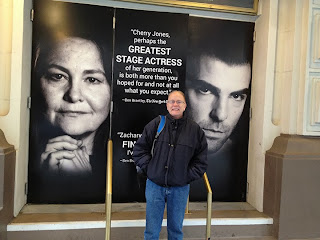 There have been very few times I have come out of a play almost speechless but the Glass Menagerie is one. The other one I can think of is Exit the King. I turned to Stu at the end and we just looked at each other. And then one or both of us said wow. Just an amazing show from start to finish.

Here's some of the reviews:

From the Daily News:


In keeping with the strong, spare scenery, performances are lean and natural. Jones, a stage great who’s won Tonys for “The Heiress” and “Doubt,” endows Amanda with potent vitality. She can lose herself in the sweet-scented memories of jonquils and gentility, but she’s no shrinking violet. She’s fiercely maternal.

Quinto, of the “Star Trek” reboot, streaks Tom, the stand-in for Williams, with exasperation and surliness. His cruel abandonment of his family in the dark is all the more credible.

As the delicate Laura, Celia Keenan-Bolger draws you in with her transparent honesty. A simple line (“Mother, you’ve made me so nervous”) or lifting a typewriter shows how everything is a chore and painful. She has lovely chemistry with Brian J. Smith, who brings easygoing charm as Jim, the gentleman caller.

The fall Broadway season has just begun. This shattering and shimmering “Glass Menagerie” is the first must-see.


From the New York Times:

Brian J. Smith plays the emissary, whose glory days as a high school hero are behind him, in a performance that more than holds its own amid the histrionics of the Wingfields. He makes it clear that while this Gentleman Caller may hail from the bustling land of reality, he, too, seesaws between highs of illusion and the harshness of life as it is. And his scene alone with Laura — in which he gives her and himself a lecture on becoming a positive person — may be the best version of it we’ll ever see.

Perhaps what’s most surprising about this production, though, is how thoroughly it makes us understand that Tom is the center, nay the author, of “The Glass Menagerie.” Mr. Quinto (best known as Mr. Spock in the current “Star Trek” movie franchise) plays Tom with more than a touch of the author who conceived him. This kinetically charged, purple-prose-spouting Tom is an angry young man who, in his way, is as self-dramatizing as Amanda and as much of an outcast as Laura. No wonder he feels he has to run away; at home, there are too many mirrors.


Neither of us had seen this as a play. Both remembered the TV show many years ago that had starred Katharine Hepburn. And that's about all we remembered was that she was in it.

It was just over powering. Even though the ending is far from happy, I didn't leave the theater feeling depressed I was in awe of the performances and still feel that way.