Another Curly W for the Nats

The Nats returned home last night for their final home stand of the regular season. Already NL East champions but looking to secure the best record in the National League to have home field advantage throughout the playoffs. The magic number is at 2 with this win.

Last night they took another step in that direction.

But there was one little hiccup along the way:

And even though the Nationals beat the New York Mets, 4-2, on Tuesday night as Adam LaRoche continued his fine bounce-back season and Tanner Roark delivered another strong start, watching Denard Span walk gingerly off the field in the third inning may have been the most lasting image. After making a spectacular head-first diving catch, Span left the game with a right knee wound that, for now, isn’t considered serious.

“I wasn’t concerned with him hitting the wall,” Manager Matt Williams said. “The way he went down was concerning. But they’re going to play. You can’t play any differently. You have to go get it. You have to dive. You have to go in and break up two. All of those things. Like the way we’ve been playing all year. We can’t change now.”


It was a very loud and very vocal crowd especially where I was sitting:

Fans cheered louder than normal for Roark as he walked from the bullpen to the dugout before the game and photos of the clinching celebration appeared on the scoreboard. They gave Zimmerman a standing ovation when he pinch-hit in the seventh inning, his first home at-bat in two months. They also gave Roark a standing ovation after departing in the seventh inning with one out and two on and the Nationals ahead 4-1.


It was an exciting evening at Nats' Park and a great way to start my baseball marathon with a win. I have tonight off but on Thursday back to the park in earnest for the final five games of the regular season. 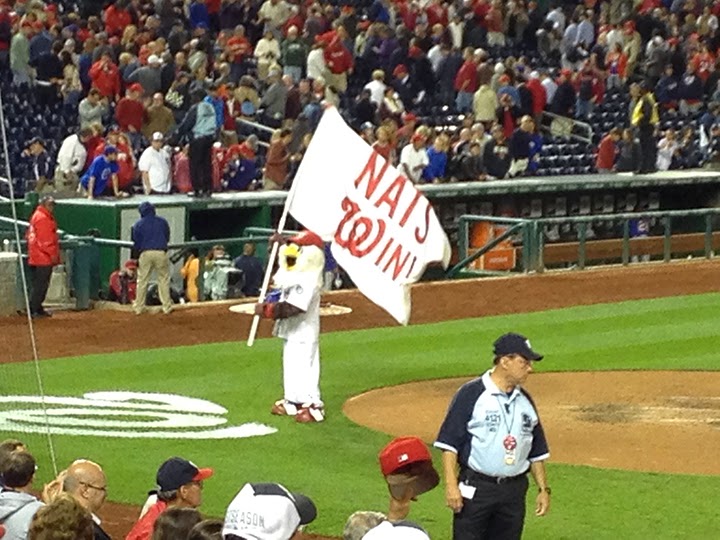