Actually I was involved in searching only one cemetery but cemeteries sounds better in the title.

I was helping Mark do some ancestery research. In fact this is the second time I've gone with him to Baltimore to do some gravestone finding. We went in August too. On the first visit we actually found some gravestones that proved to be helpful.

We'd also gone to the cemetery that we'd visited on Sunday in the last trip. But there wasn't enough information to do much of a search. We had in what section the grave of the people Mark was looking for were buried but there was no way to determine where those sections were. the first cemetery had signs posted to let you know which section you were in.

Mark sent away for a couple of books about this specific cemetery. The books showed how the cemetery was divided up into sections. Also a listing by name ofwhat sections people were buried in and the actual number of the grave.

We'd hope for some success but that was not to be the case. We looked in three separate sections but were never able to find any markers. But at least we found where they should have been. That was a little strange to say the least but Mark says that that is often what happens. You end up not finding anything.

The other strange thing was a guy driving into the cemetery asking us for directions. Or as Mark suggested for the blog post the only other living human (we saw some geese so I can't say only other living thing) we saw in the cemetery. Now we were in Baltimore and this guy was looking to get to Frederick as in Frederick, Maryland. Mark was able to help him out and send him on his way.

I have to say I rather enjoyed trying to figure out where the gravestones were. Also how the graves in the cemetery were numbered. It was a mystery which we really didn't end up solving. But like I said a fun morning.

After all who wouldn't enjoy spending Sunday morning searching in cemeteries. 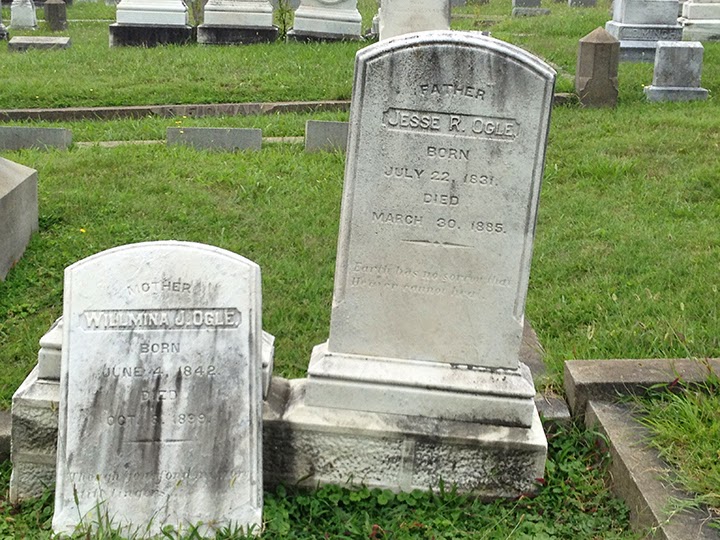