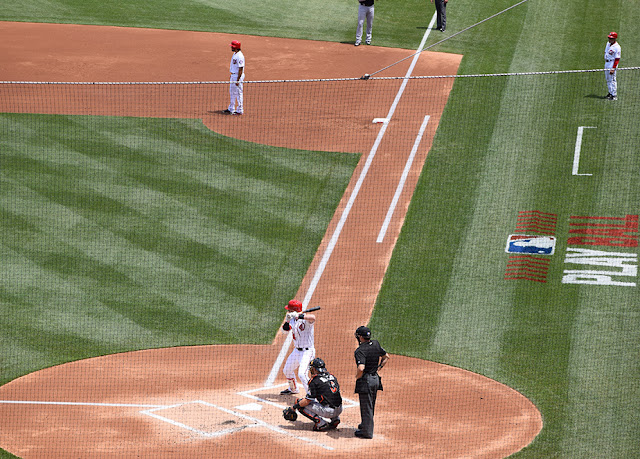 Saturday was the make up game for the one in April that was called because it was too cold and windy. The day started out nice enough. But then the rain came along and with that falling temperature. As the fans were leaving after the game was over the sun came out. Fitting since the Nats won the game.

It was however a little strange. The Nats scored three runs in the first on just one hit:


Marlins starter Justin Nicolino, meanwhile, experienced an inauspicious beginning to his afternoon when he walked Michael A. Taylor, Anthony Rendon and Bryce Harper to start the first. Daniel Murphy and Ryan Zimmerman hit sacrifice flies to give the Nationals a 2-1 lead without a hit. Then Harper stole third, his sixth stolen base, equaling his total from his MVP season a year ago. Jayson Werth drove him home with a single through the left side for a 3-1 lead.

Here are a couple more pictures of Harper's trip around the bases.