In the age of YouTube anything is possible. There was a story on these guys a couple nights ago on ABC News. One of they members posted their clip of the 12 Days of Christmas that he came across. He thought YouTube would be a great way to share it with the other members. It seems it really took off on YouTube and an recored executive saw the clip. Now 8,729,710 hits later . . .

Here's a little more of the story from ABC News:

"We are not more mature. It's pretty much like we're back in college. It's like nothing has ever changed," founding member Dan Ponce said. 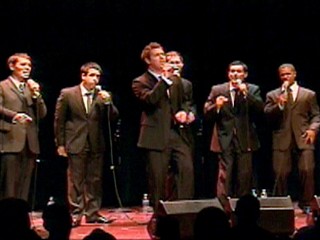 A 10-year-old video clip turns the college a capella group Straight, No Chaser into a recording sensation.
(ABC News)

"I want this to go huge. I would love this to be my career," Itkoff said.

But the members of Straight, No Chaser can't afford to quit their day jobs yet. Ponce is a reporter for ABC News affiliate WLS-TV in Chicago. Itkoff is juggling a medical sales job, a young family and his touring schedule. His wife, Cindy, has rearranged the family schedule, and flew in grandparents to babysit so she could join her husband on tour.

"The day the album came out, we went down to our local store and brought out the CD and took pictures with it," she said. "I don't know what a rock star wife is going to be like," she added, laughing.

Here's a clip of the 12 Days of Christmas. It is great!