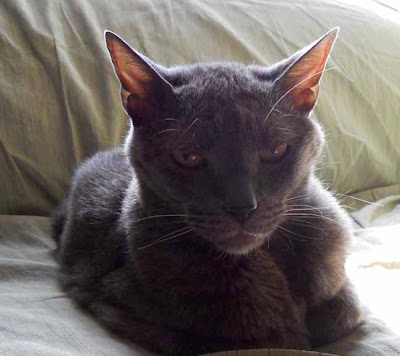 Sam has a new hobby. It is one that he doesn’t particular like and which I find rather expensive. The hobby is of course going to the vet. That’s what we’ve been doing for part of the last three weekends. Two Sunday’s ago it was to DuPont Vet for his check up to see how he was doing. A week ago Saturday it was the trip to SouthPaws for his sonogram. (Below is a sketch the vet did to show what was going on more about that later.) Yesterday it was back to DuPont to get a urine sample and a weigh in.

Besides the kidney and potential problem with his thyroid, the big problem with Sam is his continual loss of weight. When he got out of the vets he was about 10.5 pounds. His first check up he was 9 pounds 7 ounces. Then two weeks ago he was down to 9 pounds. I could tell because when I pet him on his butt I could feel the bones in his butt. But a week ago when he had the songram he was up to 9.44 pounds. Then yesterday at DuPont he was 9 pounds 8 ounces. Up again. Not a huge gain from the week before but he weighs more than he did about a month ago. So at least for now the numbers are moving higher and that’s avery good thing. I think Sam’s finally gotten over the drama of being at the vets for those days. His system has adjusted to the new diet and no longer has soft stool. I’m also a little better and putting out his food so he has enough to eat.

The next step is to see how the urine culture turns out and what if any new antibiotic he needs to be put on. I might try and see if I can get him to eat it as a pill. Here’s hoping. 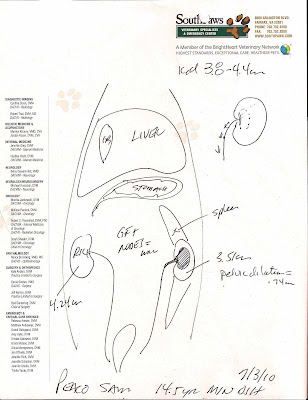 The main thing to get from this is that the right kidney is a little smaller than average. Also, for lack of a better way to describe it, it's receded from the tube that flows out of it. That's shown by the drawing of the lone kidney upper right.
Posted by Jason in DC at 5:33 PM

Email ThisBlogThis!Share to TwitterShare to FacebookShare to Pinterest
Labels: Sam