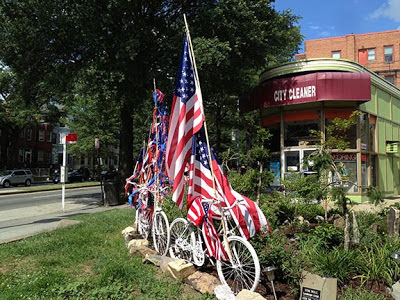 There is of course the wonderful fireworks. Actually there were two set of fireworks. The big one on July 4th and the one the night before after the Nats game (the game itself was less than memorable).

There were two baseball games. For a change I got to actually see the Nationals win a game. They came close to snatching defeat from the jaws of victory. But they didn’t for a change.

It was very strange to be heading out for a baseball game a little after 9 in the morning. The reason of course was to get the game over with before the crowds starting coming in for the concert and the fireworks. I wondered if the two beer garden like places near the park would be open that early. Well they were not only open but people were already drinking. I guess I shouldn’t have been surprised but I was.

The game was very exciting too. The final 8-5 for the Nats. They were ahead 5-2 until the 7th inning when Brewers scored three runs two of them off home runs. The fans were a little deflated after that. But in the bottom of the 7th Wilson Ramos came up and with two men on hit a home run. This was his first game back from the injury he suffered. His at bats accounted for five of the eight runs. After the home run, the fans kept clapping and clapping until he came out for his curtain call. It was a great way for him to be back in the lineup. It was long game but Nats fans went home happy.

I went back home and rested and had dinner. Then around 8:15 or so headed out for the fireworks. Amazing as always. See earlier posts for video and pictures. Friday dawned hot again and very humid. It seems that’s are pattern these days (but at least not as hot as last year when temps were around the century mark). Friday I met up with Stu and saw Dispicable Me 2 at Gallery Place. We liked the movie but thought it had a few too many plot lines especially for a kids movie. The theater was pretty crowded for the show we went to. It was rather funny to see groups of people show up about five minute before the show started and be surprised they couldn’t sit together. They went hunting for seats. In fact seat hunting kept going for awhile since some people arrived after the previews had started.

Then we went across the street to Legal Seafood and had a great dinner. I’d gotten a gift certificate from my brother last year for my birthday and we used that.


Saturday I went to a cook out. This was a last minute invite from someone I’d know in college. We’ve seen each other a couple of times over the past few years. My friend Mark was invited too. So Saturday afternoon I drove over to Mark’s and then we hopped in his car and off we went. I had a really great time. The food was fantastic and the conversation was too. Very fun indeed.

Sunday it was lunch with Tom. A tour of one of the new apartment buildings that opened up in his area and then some fun conversation.

In between all these events I watch Harry Potter and the Deathly Hollows 2 like four times. Well at least parts of it. It was on HBO and I get HBO for free with my new Xfinity service. Then last evening I got out the book and reread the last 75 pages or so.

And that was my very busy four day weekend.