No Support for Stephen Strasburg by the Nationals 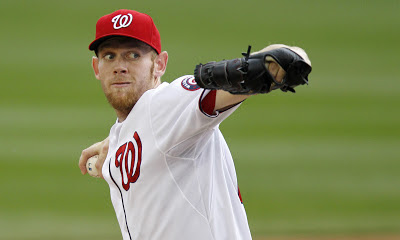 I would think at this time in the season that Stephen Strasburg would have some sort of a complex. Last night he was stellar in his performance on the mound. And yet the Nationals game him absolutely no support. As the Post put it:

The Washington Nationals stretched the outer bound of how poorly they could support Stephen Strasburg on Tuesday night, an effort that fell somewhere between cartoonish and criminal. As Strasburg overwhelmed the Milwaukee Brewers for seven innings, his offense scored no runs. After Strasburg left, the Brewers promptly scored four as Drew Storen imploded and Bryce Harper dropped a fly ball. At least nobody tripped Strasburg in the dugout or spiked his Gatorade.


Or perhaps it's the three stooges on the field when Strasburg pitches. Here's a sobering statistics about Strasburg's games. He has the sixth lowest ERA in baseball. But in run support, as in the Nationals scoring runs to help him win games, he is dead last with 2.6 runs per game. I have to assume that that average has gone done after last night's no run offense.

If the Nationals are going to get anywhere this season, like maybe the playoffs, they need to start winning games like this. They need to start supporting the pitching staff especially Strasburg.