50th Anniversary of the Kennedy Assassination — The Kalb Report

A very interesting Kalb Report on the 50th Anniversary of the Kennedy Assassination Here's a little information on the program:

A Conversation with Dan Rather on a Presidency, a Legacy and a Day that Changed America

On November 22, 1963 time stood still as the nation and the world grappled with the sudden and tragic loss of an extraordinary leader. Now 50 years since that fateful day, we remember the life and legacy of President John F. Kennedy.

Dan Rather was on the scene in Dallas that day, reporting for Walter Cronkite and CBS News, and helped break the story we could not bear to hear. On the next Kalb Report, two legends of journalism, Dan Rather and Marvin Kalb discuss reporting the unthinkable and the profound impact of the events of that tragic day.


Here's a little of Dan Rather's story on that day. He was at the end of the motorcade. At the point where it would pass under a viaduct and head to where Kennedy was supposed to make his speech. He didn't hear any of the shots. He did see the presidential limo race past him. And what he thought at first was make a wrong turn. When the rest of the motorcade didn't follow he knew that something was wrong.

He was one of the first reporters to report that Kennedy was dead. Most TV networks waited until the official announcement from the government. Everything moved so quickly that there was no time to react to the story. Rather said that happened after that long weekend.

Kalb was at the State Department filing a story. When he found out what had happened he had to walk around the building to calm down. He was of coursed asked by the network if this could have been the work of the Russians or Cubans.

Rather went on that the idea of a conspiracy came from the fact that the CIA and the FBI were not truthful with the Warren Commission. They didn't want to be seen as allowing the president to killed. And this was the first in a series of event where the government was less than truthful with people.

Both Kalb and Rather think that Kennedy would not have pulled out of Vietnam as some have said. He was an old fashioned cold warrior and would not have wanted to seen as the president who lost Vietnam. Rather then added an important point. That the war didn't become unpopular until casualties started to mount. That didn't happen until 1967-68.

The also thought that civil rights legislation would have been different. This I agree with totally. Johnson used Kennedy's death to push through the legislation. Another interesting point on if Kennedy had lived was would he have won reelection. If Kennedy hadn't died, he might have faced Goldwater but it is possible someone else could have won the Republican nomination.

Rather pointed out that one thing we should be proud of in this terrible tragedy was the peaceful passing of power. As Rather said tanks didn't surround the White House.

I'll have some of my own thought on the Kennedy assassination in an upcoming post. 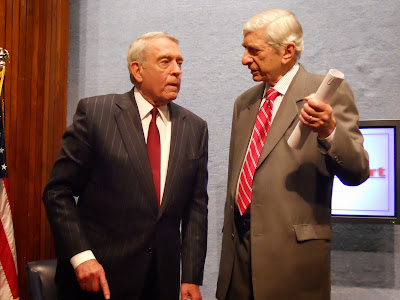 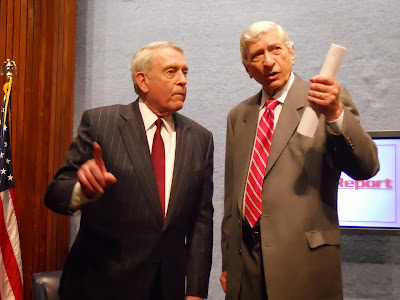