If/Then at the National Theater

Sunday was If/Then at the National Theater.

Here’s a little about the show and the try out at the National Theater:

The show, “If/Then,” is not only that most exotic of D.C. theater events — a commercial Broadway tryout — but also one of the most eagerly anticipated musicals of the season in New York, where it is scheduled to begin performances in March. First, though, it has to get on its feet here, in a month-long run beginning Tuesday that will start to gauge whether “If/Then’s” creators, the “Next to Normal” team of composer Tom Kitt, lyricist Brian Yorkey and director Michael Greif, have fashioned a hit, or still have a lot of work to do.

“If/Then” is built around the life of a 40-ish urban planner named Elizabeth, who leaves Phoenix and settles back into life in Manhattan, where the musical forks into alternate narratives, one taking her on a career-intensive path, the other on the road to love and family. It’s a valentine to New York and a contemplation of the choices one makes, what they lead to, what they close off: “Some Other Me” is the title of one “If/Then” ballad, a song redolent of the musical’s wistful sense of life’s shifting, overlapping possibilities.


You need to pay close attention to what’s going on in the show so you don’t get confused as to which path is being shown on the stage. As each path gets longer (for lack of a better way of describing it), it gets easier to tell them apart. There is some great staging and lighting techniques to let you know what is going on.

I like it. It was fun. There are a few things that need to be fixed which is the reason it’s here in DC.

Here are a few pictures of the cast as they came out of the National after the performance. 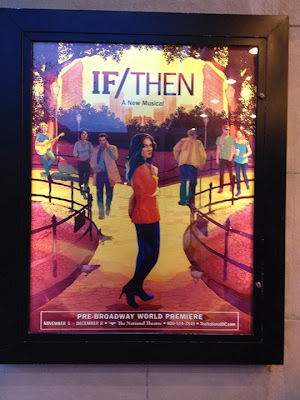