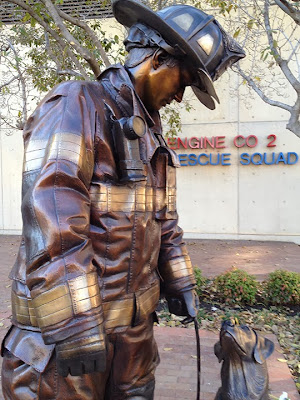 I came across this wonderful memorial a couple of weeks ago.

Here's a little about the monument:

DC's newest monument is not on the mall. It's downtown, at a working fire station. The National Fire Dog Monument was recently unveiled next to Engine Co. 2, near Judiciary Square. The monument honors "fire dogs," or arson dogs, trained to detect accelerants used in intentionally set fires. The sculptor is from Colorado, where the idea for the monument originated. An fire investigator there was inspired by the work of his dog Erin, and later Sadie. The dog depicted in the statue is modeled after Sadie. The funds for the memorial were raised by State Farm and a group called the American Human Association. The memorial is located on the east side of the Engine Co. 2, at 500 F Street NW.


There was also an article in the Washington Post about the sculptor:

Sculptor Austin Weishel’s toughest critics have four legs, not two. And unlike most human critics, they can express their disapproval by lifting one of them.

Austin is a Colorado artist whose latest work was dedicated last week at Fifth and F streets NW. It depicts an arson dog — that’s a dog that helps detect arson fires, not one that sets them — gazing longingly up at his handler.

Before it was unveiled here, the National Fire Dog Monument went on a cross-country tour, going on display in eight cities over 15 days. The life-size bronze figures were on a wooden base. When the tour was done, Austin noticed that the wood was criss-crossed with odd striations: scratches left by dog claws when owners pulled back their curious canines.

He considers it a success that dogs go up to sniff the bronze dog in his sculpture. His is certainly a hyper-realistic style.

“I want to put in every single stitch, make the eagle on the helmet and the badges on the collar as realistic as possible but still have artistic license,” said Austin, 24.

What’s remarkable is that Austin isn’t always capable of such detail in other parts of his life. He’s dyslexic and struggled in school.

I think this will turn into one of the hidden treasures in Washington. It certainly impressed me. 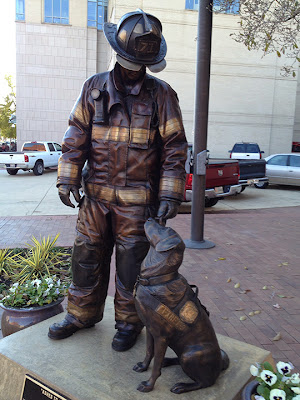 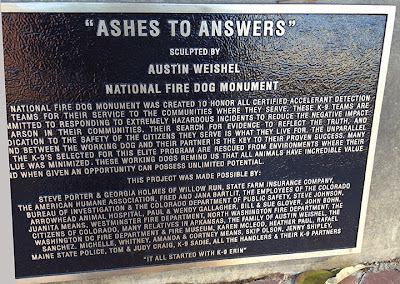 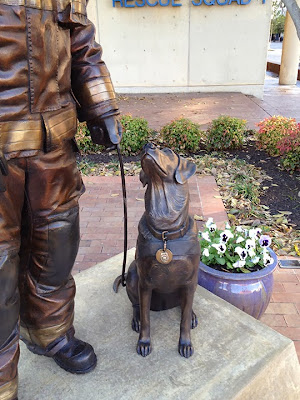 My name is Austin Weishel, I am the artist for this sculpture. I am fortunate and blessed to see you wright about this monument in DC. Feel free to take a look at a few more photos on my website of the National Fire Dog Monument at www.austinweishel.com