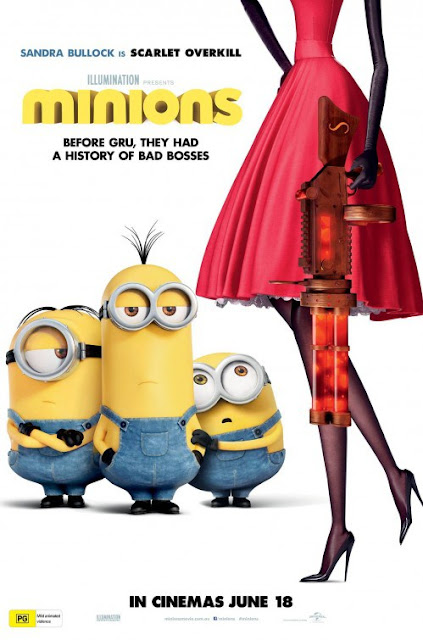 I had some time to kill before my car would get fixed. They needed to install a new fan and the fan assembly. As I mentioned earlier the fan wasn’t kicking into high gear which would allow for the a/c to actually get into the car.

When I thought all that was needed to fix the a/c was recharging the coolant, I was going to go to a 10:20 showing of Minions. But complications ensued. Turns out there was a 11:10 showing. I would still have a little time to kill before the car after the movie but I figured I could have lunch.

The cost of movie tickets continues to go up. And now they are strange prices. I paid $10.70 for Minions (I looked at my ticket and it turns out I got the senior discount without even asking). I have a Regal Club Card and with this purchase I got some free stuff. I got a free small popcorn. I’m not a huge popcorn person. I decided I would give it to someone to use. First I wanted to make sure you didn’t have to show your card in order to get the popcorn. Turns out you don’t need to show the card. I walked up to a woman in the concessions line with her son. I said I got this coupon for a free popcorn and that I didn’t eat popcorn and wondered if she would be interested in taking it. She said yes and thanked me for it. When she explained it to her son he got very excited about it. I figured that was my good deed for the day.

Along came the previews. And at the start of each one a kid behind me would ask what it was. Each time the dad explained it was for a movie coming in the future. I got concerned that this kid would be talking throughout the movie. Thankfully once the movie started he didn’t make a peep unless to laugh.

The movie is very silly. But I enjoyed it and it was exactly what I needed. The Minions dialog is mostly gibberish except when they need to say something people will understand. Like banana. And who knew that banana could be so funny. The plot is the Minions attempting to find someone evil to serve. The opening sequence shows the various masters that they find and how in each case the ineptitude of the Minions leads to the master being killed off.

They end up going off to the Artic and find a large cave to live in. But the main reason for their existence is to serve an evil master. Kevin, Bob and Stuart set out on the quest. Kevin being the head Minion. How the others are picked is one of the funniest parts of the whole moive.


Soon, they’re on their way to Villain-Con, a riff on Comic-Con only a convention celebrating the likes of Scarlet Overkill (Sandra Bullock), an evil world-conqueror in a beehive. The trio inadvertently wins a job in Overkill’s entourage, and they’re soon enmeshed in her plan to take the British throne, along with Overkill’s inventor, Herb (Jon Hamm).

There are, it should be noted, more ambitious seats of power to set one’s diabolical sights on. But this is 1960s Swinging London, a colorful if over-familiar backdrop, and the goggle-wearing Minions could just as well be chipper Mods.


At the very end Gru makes an appearance as well.

I thought this was a funny movie and a great way to spend some time while waiting for your car to be fixed.
Posted by Jason in DC at 12:15 AM