Gone to the Great Click Wheel in the Sky

To paraphrase a famous song:

As Coroner I must aver, I thoroughly examined it.
And it’s not only merely dead, it’s really most sincerely dead.

It was working fine Thursday night. Then it started doing strange things. It would play a song for awhile and then skip to the next one. Sometimes it would skip several songs. I decided I would hook it up with iTunes on my computer and see what happened. At first things seem to be going well. The iPod did syne with iTunes. The iTunes play list showed the songs I’d played for the day. But then things began to become problematic.

Suddenly there were no songs on the iPod at all. iTunes said it was necessary to restore the iPod. This would erase all the content on it. I tried to reset the iPod and see if I could somehow bring it back. To no avail. So it was decided to resort to the restore function. With much trepidation, I clicked the restore button. It restored the settings.

iTunes started to copy my songs on to the iPod. There was a moment of hope that this would some how restore my iPod. But that hope began to fade. I got an error message saying iTunes could no longer transfer songs because there was a problem with the iPod. I tried again but again the same message. The odd thing was that when I tried moving the songs over this time the total number transferring over from the iPod from iTunes was actually fewer than the total number of songs I actually have. This valiant effort produced the same results. So I tried on final time to revive the patient. No such luck. 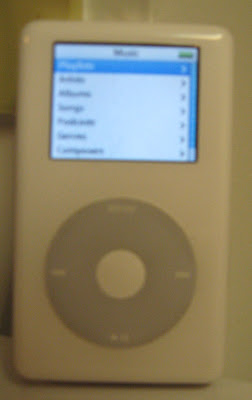 My condolences on this passing…