A Mouse in the House

It turned out there was a mouse in the house.

Sam had captured it. Now what to do. He seemed to play with it a little. Letting it go and then running after it. I thought if I could get the two of them into the front bedroom I'd have a much better chance of getting the mouse away from Sam. In the front bedroom there are fewer places for a mouse or for that matter for a cat to hide where a person can't get to them.

I went into the front bedroom and closed the closet doors. The next step was to figure out how to get the two of them in there. Sam decided to drop the mouse and they lost the mouse. I'm thinking I'm counting on you cat to keep the mouse contained until I get rid of it.

Thankfully Sam found it again. Sam then went into the front bedroom. I had taken the garbage can from the bathroom and was going to use it to trap the mouse. This actually worked as planned. Now the dilemma was to figure out what to put under the can so I could flip it over and then take it and the mouse outside. I finally used a manila folder. It took a little doing. I got it underneath one end of the can very easily. Didn't have any problems until I got to the other end of the can. Then the folder didn't want to budge. Finally got the damn thing underneath. I then slid of piece of newspaper under that. I then flipped the can.

I then proceeded downstairs and out the front door. I left the thing go on the front steps. In retrospect, I probably should have gone across the street but I was a little out of it for having been woken up at 3 in the morning.

I'm now washing everything that was on the bed. Maybe I'll go back to sleep but I'm not sure it's worth the effort.

Even after the mouse had left the house, Sam is still trying to find out where it went. 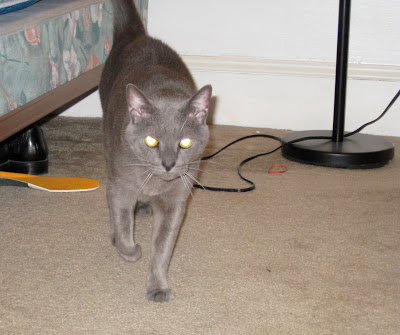 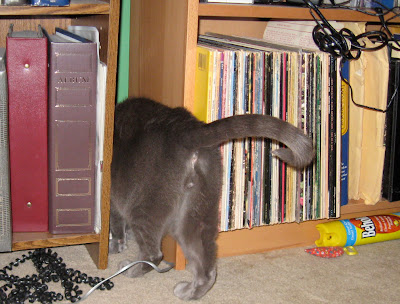 Sam seems to be like my Zac - He caught two on New Year's and so I made him a quilt in his honor entitled: "Weapon of Mouse Destruction."

Yes, Sam is like that too. But he also seems to like to play with the mouse as well. So I think he's more a subtle weapon of mouse destruction. But I don't dare tell him because it will go to his head. You know how cats are :-)

My cat used to bring mice into the house, and made ME chase them to catch them and carry them outside (catch and release…). The worst thing, though, was the time he brought in a rabbit I think he found lying dead somewhere—at least, I hope it was.