Kennedy at the Capitol

I'd debated whether to go down and see the ceremony for Ted Kennedy at the Senate. It would be very brief. But I finally decided to go. I took the Metro to Union Station and then walked to the Capitol. I got a good spot off to the right of the Senate wing very close to where the ceremony would be. It was very thankfully in the shade. It was a fairly humid and hot day.

It turned out they were running late. The plane had been delayed leaving Boston due to weather. The ceremony was supposed to be around 4:30. It now looked like it would be closer to 6 or maybe even later. I decided to stay put. I thought I'd been here this long might as well stay.

About an hour or so before the ceremony the police allowed us to move closer to the building. There was a dash by people to get a better spot. I liked where I ended up being off to the side. It turned out a little hard to hear what was said but otherwise a great spot. I shot some video which I will post soon.

There was some cloud cover and that kept the heat down a little. But for some people the heat was too much. At least half a dozen people had to helped by emergency personnel suffering from the heat.

The most ironic moment of the day was a women waiting who had on a McCain/Palin t-shirt. Figure that one out.

Finally the motorcade arrived. It came up over the rise in the Capitol drive and in the lead was the hearse with Kennedy's body. The crowd on the steps and everywhere else for that matter burst into applause.

The ceremony was short. A pray. A heartfelt thank you to all staff. A song. Then it was back in the cars and on the way to Arlington National Cemetery. I got a very good look at the flag draped coffin as they drove out toward Constitution Avenue. I also got to see Vicky in her car. She was waving to the the crowd. I hope she was able to draw strength from all the well wishers on the route.

I followed the motorcade out of the Capitol grounds. I was going to go further but somehow my heart just wasn't in it. I'd done what I'd set out to do. I said my farewell to a great man, a great Senator, a great patriot. 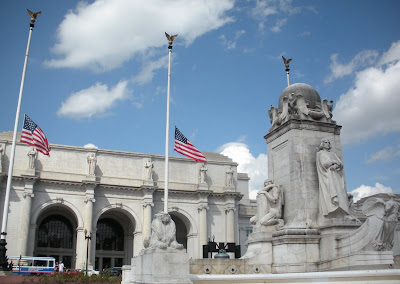 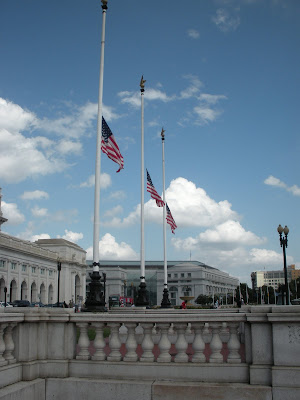 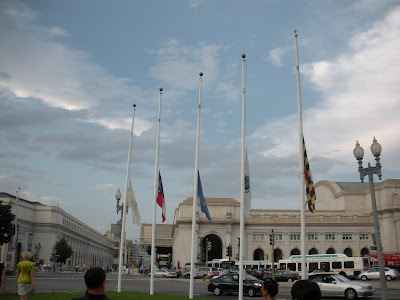 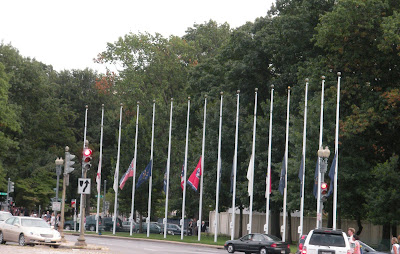