Anyone recognize the above?

How about: A wiseguy, huh?

These two sayings would of course be from the Three Stooges. I bring this up in part because my brother is a huge fan. But also because of a story that ran in today's Post. There is a Three Stooges Museum called Stoogeum. Here's a link to a story from the local paper in the area.

the only museum in this galaxy devoted entirely to the history, lore, comedy and worship of a slapstick act that has shown remarkable staying power in a pop culture that has pretty well lost the very notion of a comedy team.

The article goes on to say:

With touch-screen videos, an 85-seat theater playing a loop of dozens of Stooges shorts and throwback artifacts such as a 1980s, Pac-Man-era video game based on the Stooges and the 1960s Stooges lunchboxes that I remember kids toting to school in second grade, the museum traces the comedy team from its 1920s vaudeville roots to TV appearances into the '70s.

So here's to the Three Stooges may the live on forever. Nyuk, Nyuk, Nyuk! 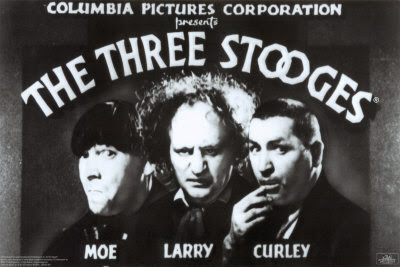