Stuart has a friend whose daughter says this was the best day.

Stu and I came close to having that last Wednesday, May 25. We had tickets to see the matinee of Follies at the Kennedy Center. Our plan was to meet up at the Foggy Bottom Metro stop around 11 and then walk into Georgetown and have lunch at Mr. Smiths. It’s one of our favorite restaurants. I was going to have one of their burgers.

We met up right on time. We both looked very dapper. It was a nice sunny but not too hot day. A great day for a walk into Georgetown. We got to Mr. Smiths and found out that they didn’t open until 11:30. We decided to walk to Georgetown Park.

Georgetown Park is a mall along M Street in Georgetown. It has seen better days and that’s putting it mildly. I think there are more empty store fronts then there are actual stores. It is struggling to survive. In fact at one point earlier this year it was on the verge of closing all together. One thing that does bring people into the place is that a branch of the DMV is located there. But I’m not sure that guarantees that people will do any shopping. We took a walk around and then headed back to Mr. Smiths.

It turned out we were still a little early so we walked down to Barnes and Noble. After that it was time for Mr. Smith’s to be open. It was after 11:30 but they were still not opened. We then opted for an Italian place around the corner. It just so happens this place is part of my mileage plus program with American Airlines. It also just so happens that from the middle of May to the middle of June each time you eat out at a restaurant that’s part of the program you get 300 miles. Not bad at all. The meal itself was great. I had pan seared salmon with a salad. Very good.

Then it was off to the Kennedy Center. We had great seats. Seven rows back. The show was incredible. We both really enjoyed it. Elaine Paige was in it. The last time I saw her was in Chess in London just about 25 years ago. Bernadetts Peters was also in it. She of course I saw just last fall in a Little Night Music another Sondheim show. Just a fantastic show.

From there we went back to my house to do resume. Stu is still looking for a job. We even had fun doing that.

Then I said I take us both out to dinner. We went to Franklin’s which is about 10 minutes away from my house by car. I finally got my hamburger and it was great. Stu had vegetarian cottage pie. He liked it too. After dinner, I drove Stu home. And that was our best day. 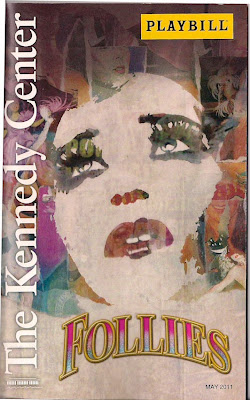