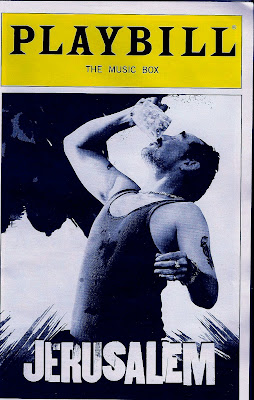 A tour de force performance by Mark Rylance in the lead role of Johnny "Rooster" Byron.

This from the review in Variety:

Rylance's deliciously subversive performance triggers both barrels of Butterworth's funny if disconcerting play -- the accessible story about the wild man who lives in the woods and attracts all the "outcasts," "undesirables," and rebellious teens in the village to his drunken parties, as well as the mythic subtext about old nature gods who don't take kindly to being uprooted from their sacred grounds.

Rylance is a strongly physical actor (he credits his chiropractor in the program bio), and his Johnny "Rooster" Byron looks like a once-noble animal gone to seed after too many years in the circus. Strutting and staggering around in the garish shirts and gypsy jewelry designed by Ultz (also responsible for the enchanted Arcadian woods where Rooster has pitched his trailer camp), Rylance gives beaucoup charisma to the earthy party animal and braggart raconteur whose ratty kingdom is about to be uprooted for a fancy housing development.

I'm so very glad I saw this. It's not exactly a happy ending for Rooster. But the last few minutes gives one pause as to the his actual fate.
Posted by Jason in DC at 7:30 AM