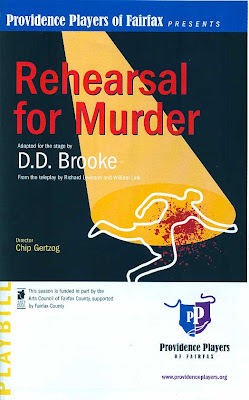 Sunday was indeed a delightful day. It actually warmed up and the sun came out. I wen to see Rehearsal for Murder put on by the Providence Players of Fairfax. It just so happens I know one of the people in the play. He’s one of the people I volunteer with at Food and Friends. He hasn’t been at volunteer night for the past couple of months because he was in rehearsals.

On Sunday three other Food and Friends volunteers along with myself met up for brunch. We went to a great place called La Cote D'or Cafe.

Then it was off to see the show. It was very well done. It is as you might have guessed by the title a murder mystery. Just when you think you've figured it out, it throws you a very big curve.

Here's a little of what the Post had to say about it:

Richard Levinson and William Link leaven the drama with jokey asides and silly aphorisms ("There's no beastliness like show beastliness," one character declares), and rely on the broadest stereotypes of the genre -- a dark and stormy night, a suspicious beverage, an assembling of all of the suspects in one room and a sudden blackout. Still, the old formula works its magic one more time.

Afterwards, we congratulated our friend on a job well day. It was a great way to spend a Sunday.
Posted by Jason in DC at 5:23 PM

Email ThisBlogThis!Share to TwitterShare to FacebookShare to Pinterest
Labels: theater