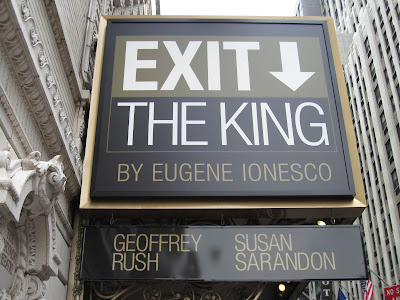 This is one of the most amazing plays I've ever seen.

This is a new production of Eugene Ionesco's Exit the King, in a translation by Neil Armfield and Geoffrey Rush. It is about a megalomaniacal ruler, King Berenger (Rush) whose incompetence has left his country in near ruin. Despite the efforts of Queen Marguerite (Susan Sarandon) and the other members of the court to convince the King he has only 90 minutes left to live, he refuses to relinquish any control.

Here's link to the review from the New York Times.

Everyone on the play was fantastic. From the Times Review:

Every performance evokes a different style — from the superb Ms. Martin’s addled, ratlike servant to the American dude-ishness of Mr. Hutchison’s soldier and the sideshow hucksterism of Mr. Sadler’s doctor. Yet somehow the disparities work, feeding our sense of the loneliness implicit in the very idea of individuality. Ms. Ambrose’s overripe emotionalism as the young queen who still loves her husband is the perfect counterpoint to the acerbic pragmatism in Ms. Sarandon’s sustained coolness (an approach that pays off in Marguerite’s overlong concluding monologue).

And Rush was incredible. I'm so happy I got to see him. Susan Sarandon is great. She really shines at the end of the play when she finally guides Rush to his death. There's a point in the first act when Rush comes out into the audience and at one point he was just a couple of feet away from me.

As I said a tour de force on every front. 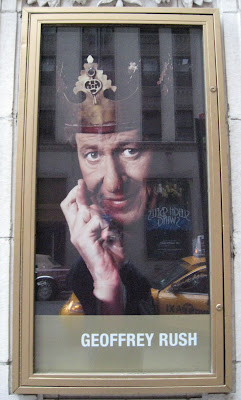 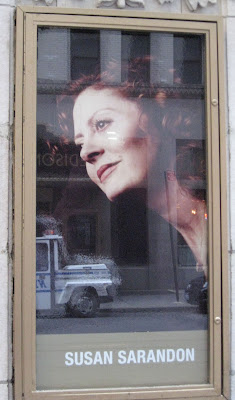 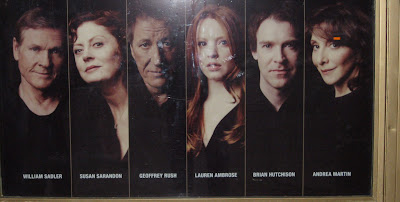