Wrapping up the November Trip to New York 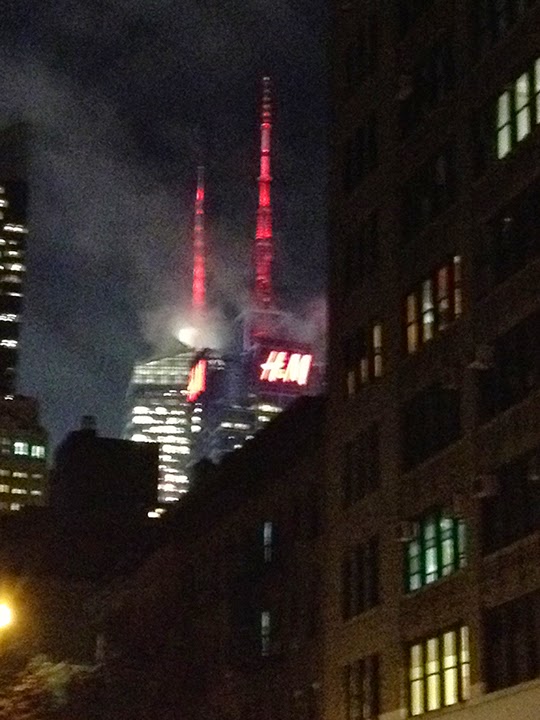 Here’s a little more on my trip with Denis to New York. We did a lot more than just walk along the High Line.

This is what are Tuesday schedule looked like and our assigned roles. My job was to get in line at the half price ticket line and get tickets to see Pippin at 8pm. The bus actually got in early because it was Veteran’s Day.

Denis got in line at the Daily Show to pick up our tickets. I got through the half price line really quickly. I was like the tenth person in line. I headed over to where Denis was. He would only have been able to pick up one of our tickets so it was lucky I happened along. The tickets are numbered and colored. And depending on what color you get that determines when you should come back and line up. There are areas for people to stand based on what your number is.

We then checked into our hotel the Belvedere which was not all that far from the Daily Show studio. We rested for about an hour and then headed back for the taping.

The Daily Show was really well organized in getting people into the taping. There were sections for people to stand in based on the number you had. They took each group in to use the bathroom and then brought them back out. Then again by groups you were let into the studio. You had to go through security. Denis had to leave a couple of things. Then into the studio you went.


As you walked into the studio there was a crew member that told you where your seat was. Denis and I ended up in the center section in the second row. The people behind us ended up some place different. For the opening part of the show there was a camera right in front of me so I had to watch the opening on one of the monitors. But after that I had a clear view.

Here’s what we got to see on the show: New York City is declared Ebola-free, China hosts the APEC summit, and U.N. Ambassador Samantha Power discusses the international efforts to combat Ebola and ISIS.

Here’s a clip from the show.

Taping went without any problems and we got to Pippin on time.

We had excellent seats. Third row center three seats in. It felt like we were on stage. This show had a lot of action in it. Lots of stunts. It takes place in a circus. From Playbill:


It was a very enjoyable show.

After that we went to Carnegie Deli for desserts which are shown below.


Wednesday morning we had breakfast at Pigalle. We’d eaten there in August. They make a mean French toast which is what I had. From there it was back to the half price ticket booth.

The booth has a new way to get tickets. You can use tickets from a previous performance that you got at the booth to jump to the front of the line. You have to have bought them in the last week. You show the ticket to the tkts employees and you get a spot right in the front of the line. I think we were about fifth in line. We were able to quickly get through the line and to tickets to see Love Letters with Candice Bergen and Alan Alda.

We had some time so we went down to the High Line. I posted pictures of that part of the trip earlier. Again I have to say this is a really neat park. The Post actually had a story about it a few days ago.

A little from the article:
On the High Line today, the locomotives are long gone, and the pedestrians have emerged the victors. Seven days a week, a shifting throng simultaneously observes and forms its own pageant. By 10 a.m., the early joggers, commuters and yoga students have melted away before the arrival of the walkers, heading up through Chelsea or down to the Meatpacking District. They stop like currents in an eddy for a while, or they find a grassy backwater, but mostly they go with the flow. The polyglot visitors find a trendy destination, the natives a transcendental sidewalk that stretches a mile and a half, now that the third and last segment opened this fall.

Love Letters was really good. Candice Bergen and Alan Alda were in it. The stage is completely bare except for a table and chairs. They both come out and sit down and start reading the letters. They actually have notebooks that they read from. It is well done but ends on rather sad note. Several times in the course of the play one or the other of them gets mad at the other and then there is silence between the two of them. It is an amazing because the theater becomes completely quite. It emphasizes the anger. Then eventually they start communicating again. Really great performances. It would be fun to go back and see it with other actors in it.

You had to go through security. You ended up in a waiting room. There was a bathroom there but only had room for one person at a time. It seemed we waited a long time to get because well did. We were seated the same way as the Daily Show. We ended up having good seats.

The Colbert set was really small compared to the Daily Show set. Once everyone is seated a guy comes out to warm up the audience. The funny thing is it is the same guy who does it at the Daily Show: Paul Mecurio. He is very funny. Turns out he’s a writer for the Daily Show and has one an Emmy and Peabody award.

Finally Colbert comes out. He answers questions as himself instead of his on screen persona. Then it’s on with the show.


It was very funny. There was a segment on drone boning where drones have caught people having sex in the great out doors. So there was video of people doing just that. The final part of the segment should people going at it on the hood of a car.

During a break in the filming Colbert announced that the censors have said part of the drone boning segment needed to be redone. And so they did it again. The car hood sequence was edited out of the second take. In fact the second take was what was used for the final cut of the show. We were able to get to the hotel in time to see it.

In the opening part of the segment Colbert says how people have loved this segment for years which of course refers to the fact this is the second time the audience has heard the material.

Thursday we headed back to our respective homes.

Another great trip to NYC!
Posted by Jason in DC at 2:38 PM