Once at the Kennedy Center 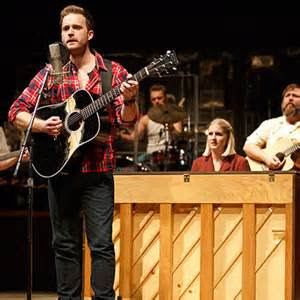 Wednesday I saw Once at the Kennedy Center. What a delightful show. From the minute you walked into the theater it was a treat. Because before the show and at intermission members of the audience could go up on stage and look at the set. They could also get a drink at the bar. One proviso was you could not bring the drink back to your seat.

As people were drinking and admiring the set, the cast of the show started to arrive. They started playing some Irish songs. People were asked to leave the stage. The songs continued from the cast. The house lights were still up when the main character took the stage. Then slowly during his first song of the show the lights began to dim That was the wonderful way the show started and that’s how it continued until the end.

The main character guy played by Stuart Ward is about to give up on his musical career when he runs into girl played by Dani de Waal. This chance encounter changes his entire life. She likes his songs and encourages him to continue with his music. She convinces him to make a CD of them. To do this he needs money so they go to a bank and get a loan for the session. They run into a very funny banker who is in fact a budding musician himself (this is one of the funniest scenes in the whole show).

Everyone in the cast plays an instrument and they are on stage the entire time of the show. When not directly i scenes they are off to the sides sitting in chairs. They provide the music and the vocal backing for the show. These are a really talented group of people. And they also dance. In fact in the final song in the first they sing dance and play their instruments all at the same time. One guy plays the cello and had it strapped to his stomach. 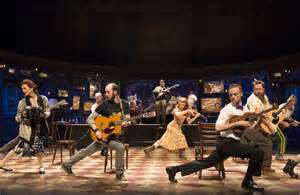 The second act centers on the struggle to record the CD. Trying to find the right people to record it and some of the session itself. Also the budding relationship between guy and girl. It has a bitter sweet ending.

This is a show well worth seeing. 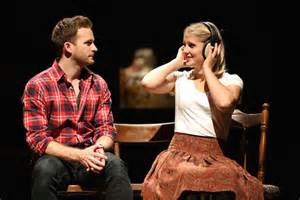