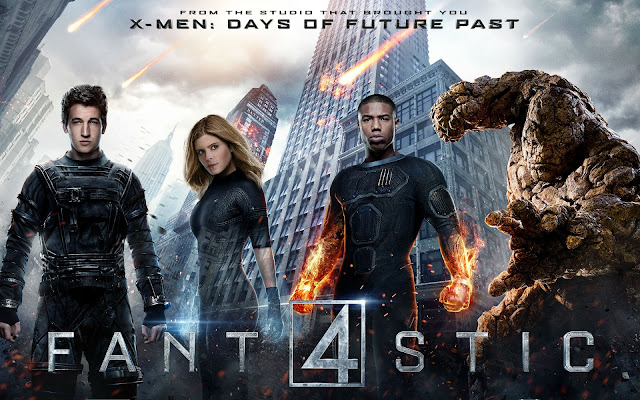 Simply put not all that fantastic. Too much back story. Too many subplots. Not enough development of the main characters. And certainly not enough the four learning how to use their powers.

It certainly starts out well. With Reed Richards and Ben Grim becoming friends in school. Trying to pursue Richards dream of teleporting. Richards gives a report on what he wants to be when he grows up. He is interrupted half way through and told to come up with something that’s actually possible in the real world. (It is good to see that Dan Castellaneta can get work outside of animation. I think he should just pick better projects.)

A few years later with his teleporter perfected he and Ben enter it in a science fair. They try it and it seems to work but doesn’t impress the committee. But it does impress Dr. Storm and his daughter Sue. Reed is whisked away to their institute and starts working on the teleporter. The institute has perfected sending things but can’t bring them back.

To complete the team Dr. Storm brings back Victor VonDoom another troubled character. Then there’s Johnny Storm who would rather drag race then work with his dad. And then there’s the budding relationship between Reed and Sue and Victor’s jealous of that. I could go on but you get the idea that there’s way way way too much baggage with this. Now you may wonder how does Ben get back in the picture.

So they perfect the teleporter. Send a monkey there and back in a pod. Next there going to send a person. But it’s not going to be any of these four. It’s going to be turned out to NASA. So the three guys get drunk and decided they are going to this other planet on their own. Reed calls up Ben and says I’m not going there with out you.

They go to the other dimension and all sorts of fun and hi-jinx takes place. Well not really. The energy in the planet attacks them (for lack of a better way to describe it). They try to escape but Victor is left behind. The pod comes back but while doing so the energy of the planet penetrates the pod and some it comes back to good ole planet earth. So that’s the set up. Then all sorts of hi-jinxs pervails after that. No that doesn’t happen either.

The main problem with the film is there is just not enough of the four coming to grips with and using their powers. The fight against Victor (yes he does show up again) is well done but is far too brief.

I like all of the main actors. It’s too bad more time couldn’t ahve been spent on them. Miles Teller is very good as Reed Richards especially as he aganizes about what his actions did to his friends.

I think the review from the Post sums it up the best:


While plenty of superhero films touch on the whole great power/great responsibility trope, the four here work hard to reverse their newfound talents. It’s rare to find heroes who don’t want to be super, and that’s where “Fantastic Four” could have gotten interesting. Instead it spends so much time on origin that there’s no room left for story. Character motivation is lazy (being the school nerd, having daddy issues, literally being named “Doom”) and the climactic battle is so subdued you’re completely unaware it IS the climactic battle.

“Fantastic Four’s” young actors do their best — Teller infuses his awkward genius with moments of sweetness, Bell’s voice conveys Ben’s sadness and eventual resignation to a life as a geological formation and Jordan brings a warmth (sorry; had to) that cuts through Johnny’s bravado. It’s just unfair that, while their characters can save the world, their talents can’t save the movie.