It was bad enough what was happening on the field in the last home game. I didn’t realize a boxing match was breaking out in the dugout. I guess calling it a boxing match would be an under statement. From our vantage point you couldn’t see what happened. I will say that I thought Harper did run to first base. Maybe not as fast as he could have but he was reacting to a frustrating day. And if the ball had been dropped he would have gotten to first base in plenty of time. This was not some passed up opportunity for a double.

Once again there was a bull pen melt down. This time in epic proportion. Most of the scoring the Phillies did in the top of the 9th was with two outs. In one case all was needed was one more strike and the inning would have been over. That certainly sounds familiar.

One nice thing was that Ian Desmond had a good day. He was 3 for 3 with a home run. It was a nice way to go out in what will was likely his last home game as a Nat. He even took the field in the top of the 9th and was then replaced and received a well deserved standing ovation.

As for the rest of the 9th. Train Wreck. 8 runs with two outs. Ouch.Ouch. Ouch.

Tom Boswell had a column in the Post and this sums up the year and the fight:

On Sunday, Papelbon yelled at Harper, accusing him of not running out a ball even though Harper had reached first base and was actually playing in a day-after-elimination game — when many 150-game-plus regulars rest — for the sake of the fans. Papelbon followed Harper, yelling, essentially giving him little choice, until Harper said (according to lip readers), “Let’s [expletive] go.” So they went.

This incident may ultimately serve a purpose. A baseball franchise that has brought joy and anticipation to the D.C. area for the last four years has, in recent weeks, had difficulty facing, much less digesting, the reality of their spectacular flop. Will it learn and rise in the aftermath of a collapse that it still barely acknowledges, much less fathoms? 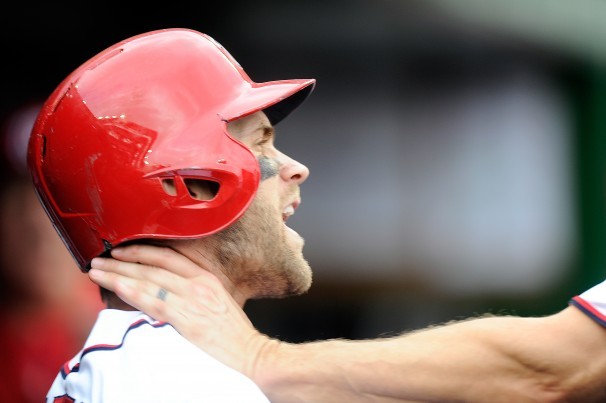 So a deep sigh on a season with great possibilities that were lost. Winable games taken into the 7th inning or later and then lost over and over and over. You get the point.

Lost in all of this is the great year Danny Espinoza had. The strong contributions from Clint Walker. And amazing numbers from Stephen Strasburg in his last four starts 50 strike outs.

Hopefully this gets sorted out over the off-season. And come April 2016 a new and improved Nats team rises from the ashes of 2015.
Posted by Jason in DC at 8:18 PM