Out of the Mouth of a Politician Something Incredibly Silly

And oh how silly this one is. Showing just how little this man knows about things. It would be funny except for the fact this person is an elected official. A conservative one. A Republican. One of those people always talking about the values in this country. Maybe he should get to reading a couple of documents that govern this county. 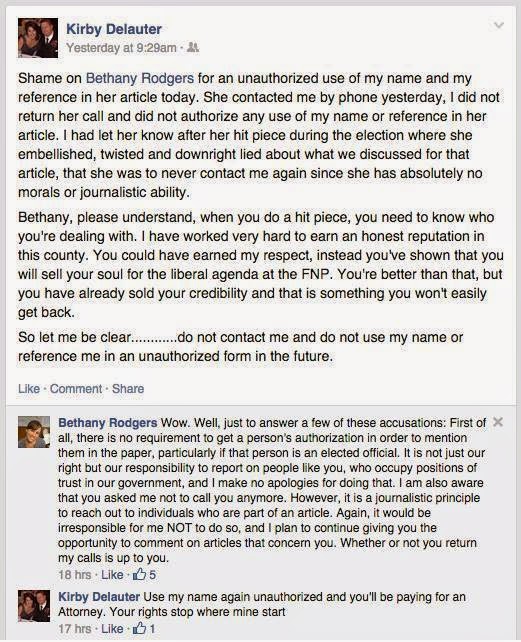 A couple of links to stories from the Post. Here and here.

Needless to say his name is being used in many many stories and all over the web now without his permission.

Where to start with this. How about here:


Congress shall make no law respecting an establishment of religion, or prohibiting the free exercise thereof; or abridging the freedom of speech, or of the press; or the right of the people peaceably to assemble, and to petition the Government for a redress of grievances.

This is a little ole amendment that appears in a real obscure document called the Constitution of the United States of America. Maybe you’ve heard of it Mr. Delauter. If not, maybe you might try to find a copy of it (it might be a little difficult to find maybe try a library or you might get lucky with a search on-line) and read it. It is after all the basis for the government of the United States of America. Oh and that little thingy quoted above. Well that’s part of the first ten amendments to the Constitution. It’s called the Bill of Rights. And that just so happens to be the First Amendment to the Constitution.

This would be laughable except for the fact this guy is an elected politician and believes he has the right sue.

Here’s a little more reaction on this:


Got a little story this morning about the Streisand Effect -- which, if you’re unfamiliar with the term, is that thing where an inept attempt to censor information leads to that information being disseminated far more widely than it otherwise would have been had the person who wanted the information censored just let it go ... let it goooooo!

(The Streisand Effect got its name when Barbra Streisand attempted to sue a photographer, who while documenting California coastal erosion also snapped her beachfront domicile -- which the singer-actress viewed as a breach of privacy. Ironically, it was her lawsuit, and not the photographer’s compendium of visual research, that ended up drawing attention to the photos of Streisand’s home, as well as getting this “effect” named after her. See also: Dan Snyder.)

Today’s story of the Streisand Effect and its discontents takes place in Frederick County, Maryland, where a man named Kirby Delauter is the county councilman elected to represent District 5. Seems that Delauter took umbrage at a story that appeared in the Frederick News-Post on Jan. 3, concerning -- of all things! -- the assignment and availability of parking spaces to county council members.

The best reaction comes from the paper Delauter said he would sue, The Frederick News-Post. This is a great editorial.

Take a look and read the entire editorial. Then go back and notice the first letter in the first word of each paragraph. It’s sure to bring a smile to your face. I’m sure they had a great deal of fun with it. But at the end they get serious about Mr. Delauter and rightly so:


Edifying as it may be to lapse into name calling -- and yes, we allowed ourselves a little childishness above and maybe a little bit below -- we need to make one serious point the councilman needs to hear and understand: We will not bow to petty intimidation tactics because a local politician thinks he can score political points with his base throwing around empty threats.


Legally, Kirby Delauter has no case.

My thoughts exactly. I’ll add it is time to call out these types of people who think they are the only ones that are "Americans" when in fact they don’t even know the basic tenets of what America is. I’ll also add thanks to social media for sending this story not just around the DC region or around the country but around the globe.

I’ll close with the last paragraph from the Frederick News-Post editorial:


Reasonable men (and women) are required to move Frederick County forward. All Kirby Delauter is doing yet again is displaying his inability to control his temper, embarrassing himself, his district, the county and those who voted him into office. If he wants to govern like a taxpayer, he needs to respect the taxpayers whose money provides his paycheck, stop this silly, inflammatory nonsense, and get to work.